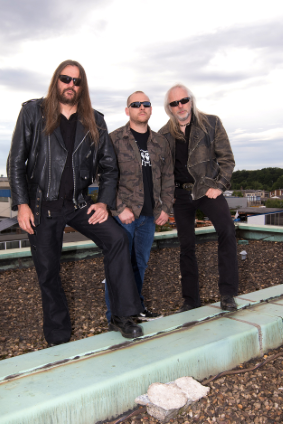 Sodom, a seminal member of the celebrated ‘Teutonic Three’kings of German thrash metal, (alongside Kreator and Destruction), formed in 1982, drawing their inspiration from bands likeMotörhead, Anvil and Venom.

Sodom made huge underground waves with their agenda setting self-released ‘In The Sign Of Evil’ EP in 1984. The newly formed Steamhammer / SPV Records label then snapped the band up, released their ‘Obsessed By Cruelty’ album in 1986, and ‘Persecution Mania’ album in 1987 before sending the band out on the road for 18 months to build a live following.

‘Agent Orange’, released in 1989, which grimly depicted the horrors of the brutal Vietnam War, then catapulted Sodom into Thrash Metal’s premier league and they set off on tour round Europe with Sepultura, going on to build up a huge following in Japan and South America.

Throughout the Nineties, Sodom lost none of their authenticity on albums like 1995’s ‘Masquerade In Blood’ or 1997’s ‘Til Death Do Us Unite’, remaining firmly grounded and never losing touch with their roots. With their 1999 release ‘Code Red’, a title that refers to the US Marines’ infamous punishment code, the trio proved as politically committed as ever. This tradition was continued in 2001 with an “educational journey” to the Far East, namely two shows in Bangkok and Saigon and the explosive subject matter of their album, ‘M 16’. Subsequently, Sodom embarked on the preparations for their first DVDs, ‘Lords Of Depravity Part I + II’, went on to bring out new studio albums ‘Sodom’ (2006) ‘In War And Pieces’ (2010) and most recently ‘Epitome Of Torture’.

‘Epitome Of Torture’, which won rave reviews worldwide on release in April 2013, was awarded KKKK in Kerrang! by Jason Arnopp, who declared; “To the delight of most lovers of German thrash, the country’s Big Three bands – Kreator, Destruction and this war obsessed trio – continue to pump out quality noise. ‘Epitome Of Torture’ is Sodom’s 14th studio record, and continues the fine work of its excellent predecessor, ‘In War And Pieces’. Nicely varied in terms of attack and tempo, it offers the odd surprise, such as the brilliantly anthemic opener, ‘My Final Bullet’, as well as the more traditionally heads-down likes of ‘S.O.D.O.M.’ or the deathly ‘Stigmatized’.”

Now ‘Decision Day’, an exceptional, even more accomplished and powerful album than its predecessor, is all set to crash into every extreme metal fan’s consciousness even harder than the repercussions of The UK’s recent ‘Decision Day’ vote to leave Europe.
Line-Up
Tom Angelripper – bass, vocals
Bernemann – guitars
Markus “Makka” Freiwald – drums