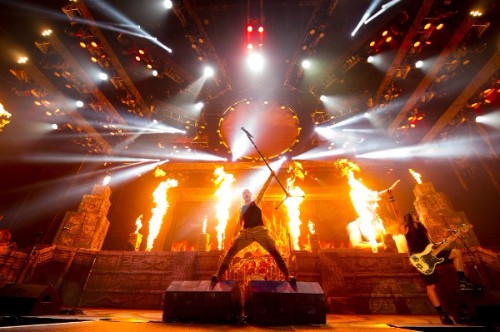 Iron Maiden’s The Book of Souls World Tour has been on the road since late February, playing to over 1.5 million fans with 72 shows in 36 counties and six continents. They will play the final show on Thursday, 4th August in Germany at Wacken Open Air Festival. ARTE Concert is going to feature the entire iconic performance on Livestream. The spectacular gig will get lavish camera attention and can be accessed anywhere in the world – a sensational experience for anyone who cannot get to show.

“We decided to finish the tour at Wacken as it is the ideal way to end this magical tour playing to 80,000 core metal fans at this legendary Metal festival. Wacken has become such as international event with many thousands of fans from many other countries around the world joining and celebrating with the German fans so it is perfect for the final show of a memorable tour. Everywhere we’ve played the fans have been amazing and the reaction to the new songs and stage show has been phenomenal. The band has loved every minute on stage.

“So when Wacken and ARTE asked us to consider a live stream of our performance there we jumped at the chance to give our fans an end of tour gift. Streaming this final show live globally allows us to thank the many fans we played to so far, and, for those who couldn’t get to see us this time round, a chance to see just how spectacular the live concert is and what they missed!”

Wolfgang Bergmann (ARTE): “The festival summer by ARTE concert is heading for an exceptional highlight, showing a live stream of British legends Iron Maiden performing their final show of an incredible tour at the Wacken Open Air. An audience of millions, in Europe and for the first time worldwide, know by now that ARTE is taking the festivals to anywhere you are.”

Holger Hübner/Thomas Jensen (ICS/Wacken): “We are incredibly happy to be able to give all these Iron Maiden and Wacken Open Air fans, worldwide, this highlight at the close of the spectacular ‘Book of Souls’ Tour. Heavy Metal fans are the best fans in the world, and Iron Maiden fans are unparalleled. It is so brilliant that everybody who could not get a ticket for the W:O:A, will be able to enjoy this ‘Night To Remember’.”

Iron Maiden at Wacken Open Air with The Book Of Souls World Tour 2016 on Thursday, 4th August, from 9.30 pm CET. Exclusive and worldwide on Livestream athttp://concert.arte.tv/de/wacken and www.wacken.com.