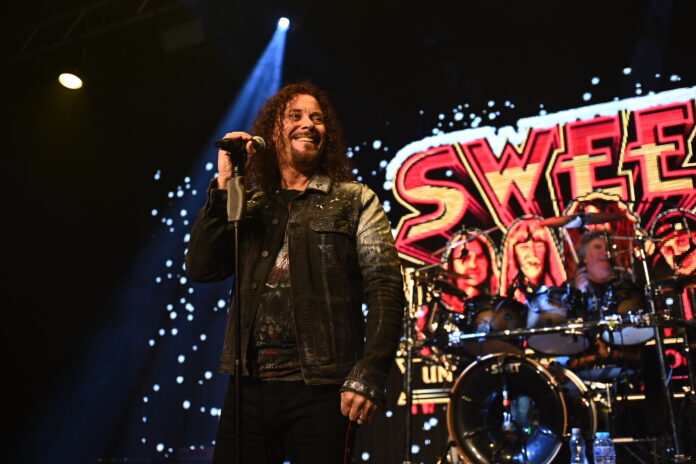 Tony Wright has had some t-shirts printed for this run. He hasn’t bothered to include a year this time as he’s fed up of shows not happening, he reckons. That means he’s selling a shirt that proudly proclaims: “Tony Wright Acoustic Tour”. It spells T.W.A.T. When read in a line (“I kept it as it had a nice font”). Never change, Tony. Never change.

His style, as you might except, translates extremely well to the acoustic arena. Joined by his mate Milly Evans (also in Terrorvision with him) he’s engaging, he’s unique, but we all know that. What isn’t often spoken about with Wright is how clever his songs are. “Self Portrait (Rock A Boogie Merchant)” is his way of “telling you what we do”. “The Blues” is a blues song with a twist, given that its about how shit it is to be lucky all the time and the couple that he plays from his recent acoustic record “The Anti Album”, “Buried You Deeper” and “Cannonball” show a side to him that you wouldn’t imagine. Bleak, self-effacing and way darker than anything else he’s done. He only gets half an hour, so you have to credit him for not chucking anything in from the band he’s famous for and instead doing exactly what he wants – and clearly enjoys – instead.

There’s a short turnaround in between bands, but the PA system knocks out a few belters, there’s Bad Company, ZZ Top, Warren Zeavon (and by the way “Tush” absolutely rules), but here’s something: At 8.45pm Sweet emerge on the stage and make that look a lot of fuss about nothing.

Actually, Sweet don’t “emerge”, at all. Four of them do. Singer, Paul Manzi on the other hand attacks the thing like a frontman of yesteryear, like a proper frontman. Getting ready for the “Action” you might say.

More than that, though, they prove that they’ve got a back catalogue that almost no band can match.

They essentially toss them out casually as if its not a big deal, but “New York Groove”, “Hellraiser” and “The Sixteens” are just that. Indeed Sweet are one of those bands with a real signature sound. Andy Scott plays guitar in his own style, the stack vocals are nothing like any other group either.

Sweet aren’t totally about nostalgia as last year’s track “Everything” is a cracker, but the last few truly are sprinkled with stardust. “Teenage Rampage”, “Wig Wam Bam”, and the downright ludicrous “Little Willy” are a hat-trick of pop classics.

The band introductions are fun, given that not only does Scott sing us a Wrexham football song (also Cardiff’s too, but as Scott is a North Walian we’d best not upset him) drummer Bruce Brisland dances, and along the way a couple of serious points are made: First that keyboard player/guitarist Tom Corey has invigorated the band, and also Scott claims that Manzi is the best singer in the country. To be fair, he’s always been excellent since his Cats In Space days, but he’s perfect for The Sweet, as he proves again on “Love Is The Oxygen”.

They take their bows after “Fox On The Run”, but be honest here, they haven’t done “Blockbuster” and “Ballroom Blitz”, so they are coming back. They do. And both those are rapturously received.

As they play, there are people everywhere in the venue smiling. That’s all this was about. This tour might be called “Unlock The Rock” but actually, rock or not, this is only about the most pure of enjoyment. Scott said it himself. “Yeah,” he reasoned, surveying the crowd. “You might be wearing an AC/DC shirt, but you want to sing Sweet songs.”

Let’s finish the review by posing a question (not conventional, but who cares about rules?): Are Sweet the most underrated of all the British rock bands?

Let’s answer our own question by simply saying: yes. Without doubt.

ALL PHOTOS COURTESY OF RICH WARD