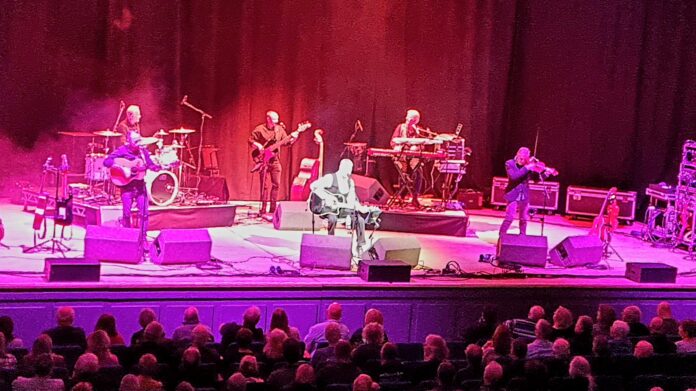 It’s funny, I suppose, how the subconscious works. I’d have been eight years old when I took my pocket money to the Co-op my gran worked in and bought “The Reflex” single by Duran Duran. I remember loving the b-side (I always loved b-sides) “Make Me Smile (Come Up And See Me)”. So much so, in fact, the following week I got a Steve Harley compilation from the record section of Library on one of our regular Thursday Night trips, when my dad would get his books for the week and I’d get a record out before reading “Football Monthly” in the reference section.

These were simpler times and it was only when I was making a playlist on Spotify for in preparation for this show (the modern equivalent, I guess) that I remembered how many Steve Harley and the Cockney Rebel tunes I knew.

They struck me, even listening as a kid as the sort of band that wasn’t flashy like my other favourites of the time and watching them tonight as they walk on – Harley with a stick – there is little fanfare or bombast. Harley says later that he is not “showbiz”, but what there is are a load of songs expertly played in a relaxed way.

“How Good It Feels” is the embodiment of that, actually, and the presence of his long time sidekick Barry Wickens’ violin gives “Promises” and “Judy Teen” a real folk feel.

A songwriter of real skill, Harley reckons that “Journey’s End (A Father’s Promise)” is the first time he’d managed real sentiment, whether that’s true or not others can judge. I will say for certain, however, that “The Coast Of Amafli” is beautiful. Windswept and ambitious, the type of thing that Mark Knopfler’s recent work is so good at.

Harley speaks of his desire to never give fans the same tour twice and for this run he’s dusted off “Mirror Freak”, after which he elucidates with warmth about Marc Bolan, the song’s subject. He’s happy to talk about his music, and it makes for a somewhat informal feel. For example, he explains the story behind “Star For A Week (Dino)” and it informs the song, although David Delarre’s solo is the star here.

A set in two halves, Harley has paced it superbly, so “Mr. Raffles (Man It Was Mean)” is something of a timeless classic, and The Stones’ “Out Of Time” (“its not a cover, it’s an interpretation”, he chides) injects a sense of fun.

Part two is equally full of class, though. Returning as just a trio for the fragile “(Love) Compared With You”, there’s another “interpretation” in the shape of “Absolute Beginners” (“It’s the best thing about a very mediocre film” , notes Harley acerbically) and a moment of true tenderness with “Only Love” which was recorded on the day his dad was being buried 350 miles away.

Reasoning that songs should evolve over time, “Mr Soft” is given a jazz makeover, while you are moved, yet again, to wonder at the poetry in his words as “The Best Years Of Our Lives” floats in. There is a real Dylan-like quality to these passages (not something you say lightly).

Making good on his lack of showbiz, there’s no encore, but there’s a definite shift prior to “Tumbling Down”, and “Sebastian” is magnificent. The band each getting their own turn in the spotlight, the power of the song shines through.

Standing and waving, taking their bows afterwards, is perhaps their one concession to “playing the game” if you will, before Harley says, with a mischievous grin: “I must know one other song” and just when you think you’ve done it all, and broken every code, here it comes. And there’s a reason that this song is so loved: it’s brilliant, classic pop music. Proving yet again that the best songs never date, and if they are dated now, they weren’t much good in the first place. Interestingly, Harley himself reckons that this one doesn’t need to “evolve”. “I’ll never mess around with ‘Make Me Smile’ he’d said earlier, ‘it’s my pension”.

It was one of a few things he’d said of great perception, but another sticks out. He’s 71 years old and has had a career stretching 50 years. And he reckons that people keep asking him when he’s packing this in. Surveying the crowd, he’d smiled and questioned: “why would I retire when I can do this….?” It was rhetorical, but need not have been. Why indeed? 50 years and the rebellious streak, together with the cheeky impudence is still there, but more important is the sheer skill, the great band and the collection of mighty songs. Steve Harley is going nowhere. That’s only because he belongs on stage.