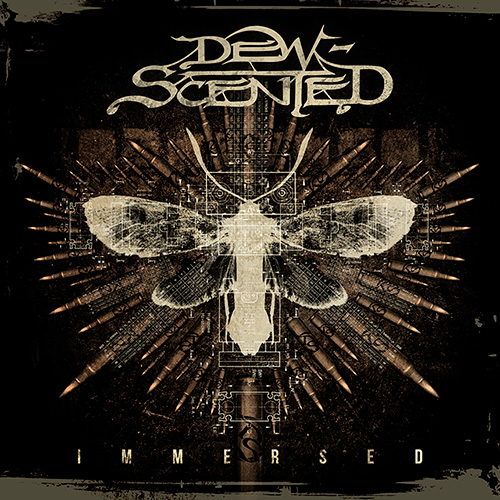 First ever clip from German thrashers

German/Dutch Thrash commando DEW-SCENTED announces the release of ‘Immersed‘, a split 7″ with ANGELUS APATRIDA who will also join them on the upcoming “Thrash Mercenaries” tour through Europe.

The 7″ features two songs of each band and is limited to 500 copies in three versions (black/orange/dark magenta marbled). ‘Immersed‘ can be pre-ordered at THIS location. TheDEW-SCENTED tracks will also be available as a digital single as of October 16th, HERE‘s the digital pre-order.

Comments DEW-SCENTED: “We love vinyl and it’s great to see a next limited Split-EP coming to life! We partnered with our buddies Angelus Apatrida on this one in the light of the upcoming European tour we are doing together next month. The D-S side, which is titled “Immersed”, features a Vio-lence cover as well as a re-recording of “New Found Pain” (Originally on 2003’s “Impact” album!), both recorded during the “Intermination” sessions and still unreleased.” (Leif Jensen)

“‘World In A World’ was one of my all-time favourite Bay-area thrash songs. Vio-lence was a highly underrated band IMHO (much like Forbidden, I might add…) and I always wanted to play that track one day. So when we were throwing around ideas for bonus tracks, it was immediately my nr.1 pick!” (Marvin Vriesde)

DEW-SCENTED have also just released their first video clip, directed by Philipp Hirsch / Film-M (Amon Amarth, Heaven Shall Burn, Triptykon, etc.), in support of their latest studio album ‘Intermination‘. Surf over to the website of Terrorizer at this location to check out ‘Ruptured Perpetually‘! http://www.terrorizer.com/news/dew-scented-release-video-for-ruptured-perpetually/

“For the video for ‘Ruptured Perpetually’, we reached out to Philipp from Film-M. Philipp also directed our first video, ten years ago, for the song ‘Turn To Ash’. During the shoot I painfully remembered how Philip makes you push the envelope with the performance for the video. It was a long day of shredding and headbanging, but judging by the endresult, it was definitely worth it! In short, the song is about someone who devotes his life to religion and finds out right before the end, that there is no afterlife. It just ends. I love how the video captures the dark atmosphere of the lyrical and musical concept. The devotion towards the light in a world filled with darkness. The riffs in the song symbolize religion. They all are variations based on the main riff in the song. Constantly shifting in perspective and posing a constant threat, building up to a climax and all returning to the uniform beginning at the end. The alpha and the omega, ending in silence. Nothingness.” (Marvin Vriesde)

DEW-SCENTED released their most recent album ‘Intermination‘ June, 12th. You can still order your copies and check out music of the album at metalblade.com/dewscented.