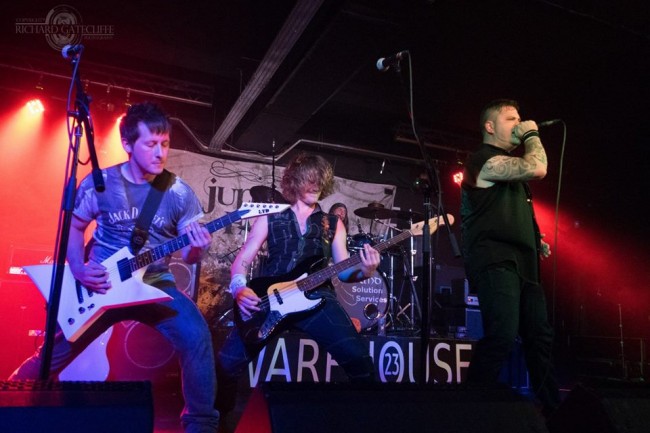 The X, Y and (Roy) Z. We catch up with James from fast rising Yorkshire rockers Jupiter Falls

First things first, obvious place to start, but you’ve got Roy Z (Bruce Dickinson, Judas Priest) to produce the record. How did that happen?
The whole Roy Z thing came out of the blue really. Our former manager mentioned that she would like Roy to produce the album, then one day after a day in the studio the phone rang, it was Roy calling from L.A and he said he loved the record and wanted to work on it. We were all really shocked when that happened

Sticking with Roy, what did you learn from him? Obviously he’s worked with some of the biggest artists there is, it must have been good to get that experience?
It was awesome having someone as big as Roy do the album. To be totally honest it took a while for it to sink in. It was a great experience and also raised the profile of the band virtually overnight

Elsewhere with the people you’ve worked with, what were the Red Dragon Cartel shows like?
The Red Dragon shows were an absolute blast, it was the first time we had done overseas shows too. It was very different to what we were used to, the venues treat us like royalty which was nice. And we got on with all the guys in Red Dragon really well.

On the journey you’ve been on so far, if you had to pick out a highlight?
For me personally (James) it was hearing our music on the radio for the first time and also the amazing reviews we have received.

Now the album itself, it felt like you had a lot to say……?
We always have a lot to say haha. We like to tell stories through our music. It’s the same with album number two which is pretty much complete too. And most of it is personal experience from either myself or I would write about another member in the band.

There were plenty of disparate styles on it, was this always a plan or was it something that happened organically?
The styles just kind of happened and then we thought it’s actually quite cool having so many different styles of rock on the record so we have just kind of stuck with that now. Keep people guessing what the next track will be like.

Now there’s a UK tour. You must be looking forward to that?
We honestly can’t wait. It’s been a long time coming as the album was around a year late coming out. But we are all set for January and hopefully the people of the UK will appreciate our live show. We take a lot of pride from our live performances and the reaction we get.

In the short term, what next for Jupiter Falls?
Tour, Album 2 release, tour, album 3 release, tour. That’s pretty much it.

In the longer term, if I’m doing this interview in two years where do you want to be?
As long as people enjoy our music, we will be exactly where we want to be. Maybe a few festivals thrown in too. (watch this space haha)

A little harder perhaps, but you guys seem to be very much an old-school band (this is meant as a compliment) how hard is to be that type of band these days, do you need a social media gimmick, say?
Social media is unfortunately the way it is now. The music industry has changed so much that its harder for bands and artists to break out. And without social media it would be even harder. I personally hate social media but I can see why it needs to be there now. It has helped the band a lot.

Finally, any bands that you’ve played with that you think readers should check out?
We have played with some exceptional bands. For me (James) there is a band called Dead White Doves who will be supporting us on the tour. Another called Stand Alone, A Mouth Full Of Matches. Too many to mention if I have forgotten any I apologise but they were all awesome.

Revolution is out now.