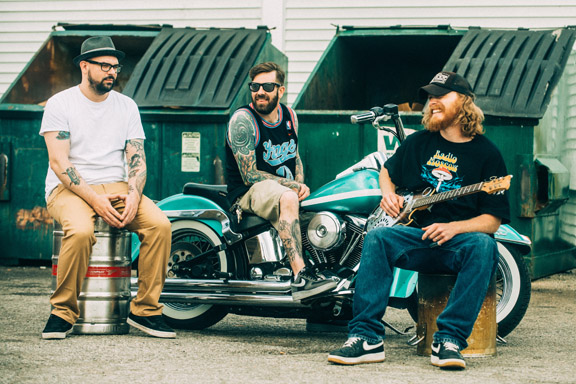 Fort Worth’s nastiest blues trio, Left Lane Cruiser released their new record “Dirty Spliff Blues” this week, and we are including this article for two reasons.

2. Look who gets quoted as the second review down …..

[9.5/10] Dirty Spliff Blues is an all-encompassing trawl through some dark side of a party that never seems to end, all of which happens over the sort of retro blues stomp which is somewhere between Seasick Steve, The White Stripes and Kyuss… nothing short of magnificent. – MAXIMUM VOLUME

On Dirty Spliff Blues Left Lane Cruiser sticks to what they do best, playing blues changes with all the noise and volume they can muster and with a commitment to the heavy that they’ve managed to separate from the metal. Dirty Spliff Blues is as good an exercise in bong-infused blues as Left Lane Cruiser have delivered in a while, and if you want to keep the neighbors awake and have a good time doing it, this will do just fine. – ALLMUSIC

Subtle it aint, but Dirty Spliff Blues packs one hell of a punch, a breathless 40 minutes of brawler blues that shows Left Lane Cruiser can deliver quality as well as quantity. – THE BLUES MAGAZINE

Hard rockin’ punk blues veterans Left Lane Cruiser have a new album, and all we can say is that they’re in fine, fine form. – MAD MACKEREL

Not the same old blues – these are genuine lo-fi rockers. – BLUES IN THE NORTHWEST

Dirty Spliff Blues by Left Lane Cruiser is awesome in its intensity, drive, and swagger. It’s so rare to hear music these days that’s actually transgressive, in-your-face, and unapologetic. You know, just like the blues used to be. They know how to create a wall of fuzzy guitar blues sounds cranked up to 11. There are touchstones to early rural Mississippi blues and I have a feeling Son House and Howlin’ Wolf would feel right at home at a Left Lane Cruiser show. – AMERICANA MUSIC SHOW

The last time we were discussing Fort Wayne, Indiana’s pride and joy Left Lane Cruiser, it was a little duo with a big, grimy sound. Sometime between then and now, they’ve replaced the drummer, acquired a bass player and now it’s a tidy trio with an even bigger, brasher sonic footprint… Some more damned nice ‘n’ dirty rock and roll. – SOMETHING ELSE!

The band’s truly broken bad and there’s no looking back. – I-94 BAR

The best thing about every new Left Lane Cruiser album is that they never tame it down. – RUSTIC FLOW

I said on their last album that Left Lane Cruiser has yet to make their definitive album, well that day may have finally come. This is their best release yet. – GLACIALLY MUSICAL

…equal parts greasy blues and rock and roll. If you’re already a fan of Left Lane Cruiser, their new song “Dirty Spliff Blues” will probably get you to add the new album to your collection. If you’re unfamiliar with this band, this is a good introduction to their sound, and quite possibly a gateway to exploring more of the music of Left Lane Cruiser. – AXS

Previous article
Fight For The Right To Party
Next article
REVIEW: FREEDOM HAWK – Into Your Mind (2015)