Fight For The Right To Party 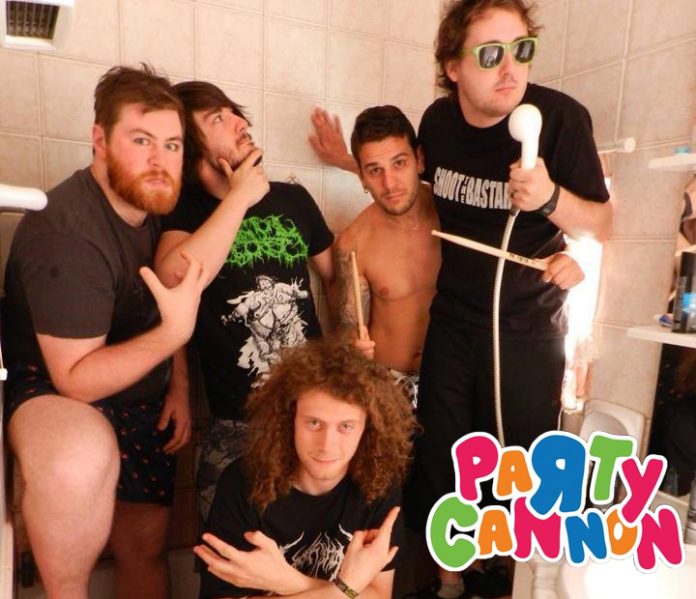 Scottish slamming quintet PARTY CANNON are back with their debut album “Bong Hit Hospitalisation“. Following the same footsteps as their well-received E.P. “Partied in Half”, these party-slammers bestow the next level of extreme comedic brutality; “widdly riffs, mega slams, terrible samples and biscuit tin snare”. So get ready to open up a beer, smoke a bowl, and party your brains out to “Bong Hit Hospitalisation”

Featuting a new “out of the ordinery” album cover, Bong Hit Hospitalisation was produced by Rob Hobson at Silent City Studios (The Afternoon Gentlemen, Kastrated, Introrectalgestation, Repugnance, and more).

Bong Hit Hospitalisation is set for release July 7th via Gore House Productions as CD and Digital.
Catch PARTY CANNON this summer during their U.S. tour along with Epicardiectomy and Parasitic Ejaculation

Bong Hit Hospitalisation Tracklisting:
1. Russian Zombie Smack (Krokodil)
2. Jack Vs The Exotic Crustacean
3. There’s A Reason You’re Single
4. Keg Stand By Me
5. Ectomy Part 1 (Get Back To Work)
6. Ectomy Part 2 (Brutalitarian Rhapsody)
7. Interested Is Not The Word
8. Battle Of The Spider-Men!
9. Screech Even Sold His Body To Science
10. We Prefer The Term Living Impaired

Previous article
Take It As Red
Next article
Spliff’s Out – Now!