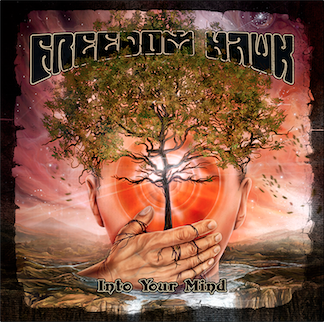 Did we miss a memo somewhere? Has there been a conference call that we weren’t invited to? Has every band just decided the past was better than the present?

Whatever the explanation there hasn’t half been a run of retro sounding rock recently. On these pages we’ve reviewed the pick of the ones we’ve received. Encyrcle with their Mercyful Fate thing, that was good, Palace Of The King, yeah that was great too.

“This,” to give the briefest of précis, is the fourth album from this bunch of reprobates from Virginia Dunes in the U.S. Of A. The note that came with the record described their sound – amongst other things – as “Buttery Fuzz” and whilst you are tempted to laugh at the preposterous nature of that phrase, after listening to music like “Journey Home” you are not just on board with the sentiment, but you actually wouldn’t want the record described any other way. There is a warm quality, it’s tasty, it’s welcoming, but it’s unmistakably a record that looks back to the early 1970s for its inspiration, and “buttery fuzz” fits this just fine.

“…..Mind” is capable of moments of rare brilliance. There’s a song amongst it’s canon called “Lost In Space” and if the name alone evokes thoughts of a widescreen, traveling nature, then nothing actually prepares you for just how good it is. By turns its Black Sabbath, it’s Led Zep, and when it wants to cut loose, as it does seemingly for wanton fun, it can gallop like Maiden. It is a stunning piece of of music.

Not that the rest of it is anywhere near shabby. “On Your Knees” rocks like Ozzy fronting Clutch might, while “Waterfall” takes the Clutch ball a little further, and smashes it into the back of the net over a psychedelic hum, and “Radar” was a Classic Rock track of the week this week with good reason. The riff is most definitely not dead – and if it was, Freedom Hawk just revived it.

Like all the best records “…..Mind” is a tough so and so to pin down. “Beyond Our Realm” is part swirling, blessed out Flower Power and part a fist in the face with Sabbath’s first album tattooed on the knuckles, and the title track is just a superb stoner blues stomper.

This Hawk manages to spread its wings before the end too, nearly seven minutes of thumping, pulsing rock sees “The Line” burrow its way in, and the crunching “All Because Of You” sees singer/guitarist TR Martin explore his inner Robert Plant just one last time.

With “Into Your Mind” Freedom Hawk have constructed an album that is complex and magnificent. Those looking for just about the best of the current slew 1970s sounding doom influenced rock n roll need look no further.