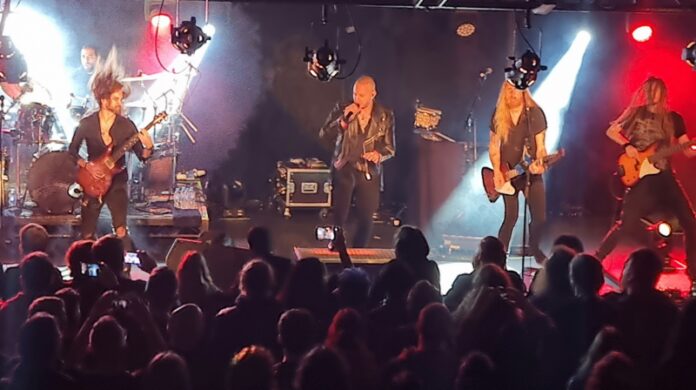 When, before Soen play “Antagonist” tonight, singer Joel Ekelöf dedicates it to a “young man in the audience who knows the words better than I do”, the kid look chuffed as hell. It was a nice moment, but I’d argue Ekelöf hit the nail on the head at the same time.

The five piece, it is clear from watching them for the first time here, are the type of band you can loose yourself in, invest your time in and if you were to do it, the rewards are rich, no doubt.

The medium sized room at The Institute is packed – worth pointing out as the average man in the Birmingham street probably doesn’t know their stuff and Anthrax are playing just up the road – Soen have been going under the radar for a decade and it sort of suits them too.

What is interesting about them is the contrasts. You’d expect them to be shrouded in darkness, but instead “Monarch” sees them burst onto the stage in a blaze of colour. You’d expect them, perhaps, to lurk in the shadows and get under your skin almost by osmosis, but instead “Deceiver” thunders with a real heaviness and intent. In the middle there’s Ekelöf, leather clad he could be fronting any type of metal band to look at him, but his voice is sensational. To the left of the stage is Cody Lee Ford and his guitar playing is right up there in terms of its skill and versatility.

Lars Åhlund ensures the way they use keyboards – with “Martyrs” being a prime example – is clever, and if “Savia” lends itself to Tool comparisons, then I’d imagine that no one here is too upset? Either way, they’re there. Special mention for Ekelöf on this one as well for the sublime way he holds the note towards the end.

The contrasts of the band are what makes them. “Lumerian” shows them starkly. Thunderous when they lock into a groove, yet in the same soextreesng, Ford plays a lead that is pure AOR. Anything goes it seems, and so it should.

This sonic journey continues with the string flavoured “Modesty” and the hook line of “defeat this monster” is one that seeps into the conscience. There’s a slower, more mellifluous diversion with “Lucidity” but its one that works, as does lighting the room with mobile phone torches.

There’s band introductions (and this is an outfit that has gone through a few changes in the last few years, but Martin Lopez (once of Opeth) is one of two originals, along with Ekelöf. The new arrivals since 2016, though, have brought a real beguiling quality. Indeed, there’s elements of “Illusion” that in way sum the whole night up.

Even though this feels less bombastic than most shows, almost like a recital, there’s still an encore. “Lascivious” brings to mind Marillion’s later work and Lopez is in fine a form on the drums. “Lotus,” likewise is mighty. A great slab of heavy to finish, but its one that is accessible. This is not a band that is making music that is designed to be that of a cult act, instead this is a band that have belief, skill and interesting, intricate ways of delivering it.

As the band take their bows and bassist Oleksii ‘Kobel drapes himself in the flag of Ukraine as the band smile, you think back to something Ekelöf had said earlier. “This is our first time here…..it won’t be the last.”

You’d imagine the sheer ability of the band and the sheer quality of their songs, not to mention the obvious enjoyment they show in playing them, will mean that is not just idle stage chatter. Surely like the rest of Soen’s set, it was done with a real conviction.