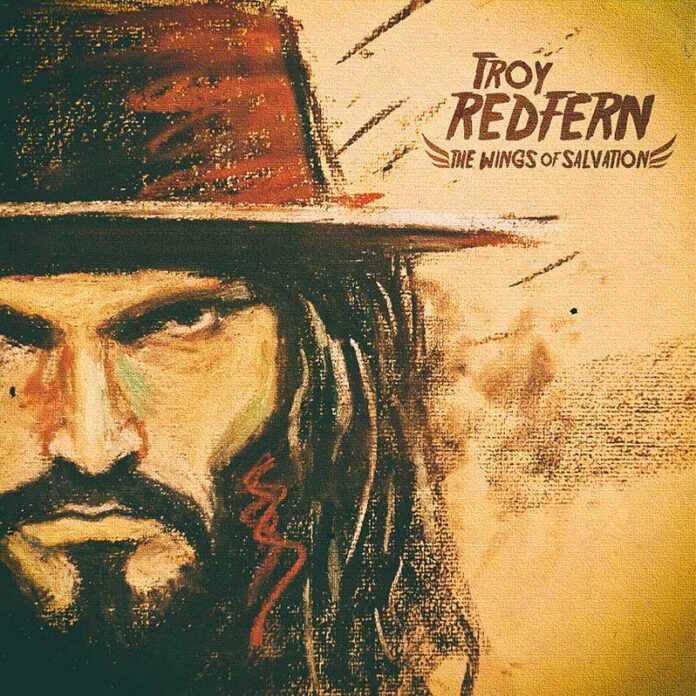 If you’ve seen any big rock n roll band playing anywhere in the last year since lockdown ended and gigs returned, then I’ll bet you any money you like, you’ve seen Troy Redfern.

Robert Jon And The Wreck, The Sweet, When Rivers Meet. Three times I’ve seen him play solo up there with just him and his guitar for company. And he’s raw. He’s superb and he does a cover of “John The Revelator” that boils blues down to the primal.

Yet it was the show I saw him play with his band, when they opened for The Quireboys at the start of the year, that seemed best to sum his music up. He’s a classic rocker. He looks like a rock star. He is a rock star in waiting. Yes, he’s a gifted player, but it’s the sheer heads down, lets go, visceral fun of rock n roll that has categorised his recorded work (and I am going way back here to when he was sending his own records out for review).

Last year’s “The Fire Cosmic” was superb (awarded 9/10 on these pages) but “Wings Of Salvation” is better. Redfern himself says: “My goal was to make a record that was a true representation of where I am right now as an artist,” and even in the first three songs I’ll tell you that he’s done it. That trio is not just as good as any artist has done this year, but its more besides. It’s a snapshot into this world, into why I wrote the intro the way I did.

“Gasoline” the opener rips a slide guitar solo out of its back pocket, but its rock n roll. When he sings “nothing’s gonna stand in my way,” you’d best believe it sounds like a promise.

And, lets be honest about this, one of these stands above the rest. “Sweet Carolina” casually tossed out second tune is a stomping glam rocker, think The Stones jamming with T-Rex. In fact, don’t think at all – just do it. Lose yourself in it.

I did say the opening trio, mind you and that’s because “Come On” marries the raw of the solo live shows and sticks it in a studio setting, which isn’t to say the rest are a dip in form because they aren’t. “Navajo” is the best song about Native Americans since “Run To The Hills”(confident prediction there).

What is striking about this record is how organic and cohesive it sounds. A real band effort in a way. Remarkable given that the bass parts are played by producer Dave Marks and the drums by This Feelings sticksman Paul Stewart. They’ve done an incredible job, the three of them. There’s a real depth to “Mercy” and “Can’t Let Go” is ready to shake the festival circuit. It’s got a “whoa, whoa, whoa” intro that is made for live shows (and was probably added in just for that).

“Dark Religion” is an interesting one too. Heavy, with an unsettling tinge. There’s a sort of Urban Voodoo Machine edge to this, which is new for Redfern and is a welcome diversion, although you know he’s going to follow it up with a real barn burner of a thing. “Profane” lets itself go, racing off, and Stewart’s unhinged drumming here is joy.

“Down” just about restrains itself, but there’s a swirl of confusion and psychedelics to the chorus, which is indicative of just another twist and turn to the album. There are many. “Heart And Soul” though, is pure blues. Pure, unadulterated Troy, if you will. As if to remind himself and his audience of where he’d come from.

It is interesting to think about where “Wings Of Salvation” pits Troy Redfern and where he fits in. There was a name I kept coming back to throughout this and it was that of Kris Barras. He was a DIY act, now he’s touring the world and playing shows in 1200 capacity clubs. He deserved his success for not only working hard but for being a cut above his peers. The same words apply right here and this album is the work of an artist who keeps growing.