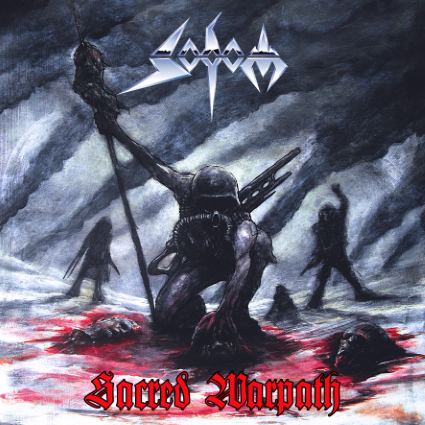 We’ve said before and we will probably have to say it again, but thrash metal isn’t doing too well at the moment.

Most of the greats of the genre have either left it behind or are struggling to replicate past glories. Some are still making great music, but it’s not thrash music and no one is claiming it is.

It’s gratifying then, that there are still bands out there who are keeping it real.

Step forward Sodom. Everything about this screams old school. From releasing a new track just for a single, like bands used to, to the packaging, which is from one of their old demos. Even releasing a single in the first place, is the way things used to be done.

“Sacred Warpath” is their first new track for two years and clearly much of the interest here is in that track. Happily it is a superb song, echoes of Slayer abound, but it is a superior slice of metal. All types of evil appear to be summoned in its lyrics as Tom Angelripper is at his most menacing.

The EP adds three live tracks. 1990s “Saw Is The Law” is prefaced by the particularly annoying pop song “Bird Is The Word” (favourite of Peter Griffin on Family Guy”)

“Staigmatized” from their brilliant 2012 display of bloodletting “Epitome Of Torture” is welcome and “City Of God” completes the package in fine style.

Released to coincide with their European tour as guests of Arch Enemy and Kreator, you suspect the other two may have their work cut out not to be upstaged.