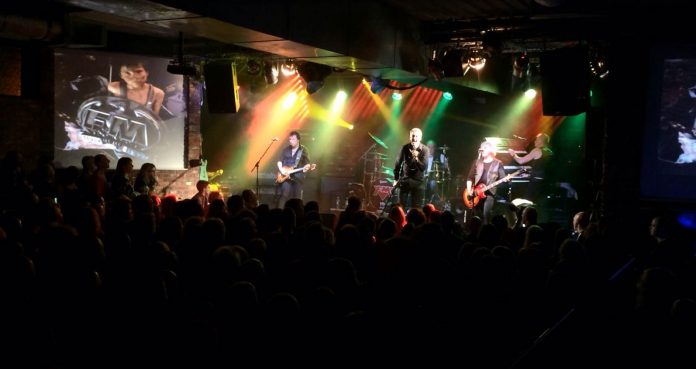 Neville McDonald has been at this game for a long long time. Best known – still – as the chest beating frontman of 1990s nearly-became-massive band Skin, Hand Of Dimes sees our Nev reunited with his former songwriting partner in Kooga, Neil Garland. It’s damn near a quarter of a century since the two last made records together. Tonight they are stripped down to the bare bones as it’s just the boys and their acoustics for this jaunt. There are five of them on stage, but it is McDonald who takes centre stage in every sense. Even when he was telling to Look But Don’t Touch (baby baby baby) he always had a superb voice, you might even say it was Unbelievable (stop it now – Ed) now it has – shall we say – a few more miles on the clock it really suits the more bluesy and soulful material. “Angels And Demons” has a Free type feel, while “Drifter” and “Stranger In My Home Town” benefit hugely from the use of Garland’s harmonica. “Jacobs Ladder” is slower but with it’s organ flourishes it’s no less effective and “Watch You Dance” has country overtones, and is a delivered as if the band are around a campfire. On this evidence Hand Of Dimes are worth a fistful of dollars.

FM, since they returned a few years ago, have essentially reclaimed their crown as the Kings of British AOR. Their comeback has essentially been one long giant crest of a very big wave.

The sold out signs outside mean they don’t need an excuse to tour, but this being their thirtieth anniversary and all, it would have been rude not too, wouldn’t it?

The band are straight in with some new stuff “Tough Love” a superior cut from last years “Rockville” record. And actually, it’s basically the same set they played in this very room about 18 months ago, so “I Belong To The Night” follows and then great songs just keep coming for 80 minutes.

Because here’s the thing; in front of their own crowd (and make no mistake, this is very much their crowd) FM are basically unstoppable.

They don’t do anything that hasn’t been done a lot of times before: guitars solo, keyboards parp and people sing lots of songs about love at varying speeds, but no one has ever done this better than FM. “Don’t Stop” positively crackles, helped along by Jim Kirkpatrick (who last week was helping out Bernie Marsden) being just a bit good on guitar, Jem Davis giving the keyboards exactly when you want them and Steve Overland being the perfect singer for this type of band. “Closer To Heaven,” a ballad of the humungous variety, which would be awful, cloying and horrible if the wrong band got their hands on it, works perfectly as a tear-jerker here, while “That Girl” is calmly turned into a great big singalong and “Wildside” with it’s slightly harder edge is the best song Bon Jovi never wrote (and better than anything they have written in the last decade).

If you pushed the band, though, MVM would guess that the bass heavy and groovy “Tough It Out” is their favourite of the night, as they are clearly happy to plunder their classics, although there’s a chance that “Over You” which begins with a wonderful blues interlude from Kirkpatrick and features a twin guitar solo would run it close.

However, at a time when their peers are content to cash in, FM are still writing great songs, the quite wonderful “Crosstown Train” proves that and shows that this isn’t just about nostalgia.

The encore includes “Story Of My Life” which is mostly a duet between Overland and Davis and deftly shows the versatility of this band in the process, while “The Other Side Of Midnight” merely shows that all keyboard players are frustrated guitar players as Jem Davis is stage front playing one of those things the fella from Level 42 used to.

Then it happens. Bernie Marsden, who was backstage all night, appears to storm through “Here I Go Again” and Rod Stewart’s “Hot Legs” to cap a fantastic night.

The phrase “British Institution” is worn to the point of cliche, and while it’s apt to describe FM, it barely does them justice. Let’s make it blindingly simple: Forget the arena bothering Foreigners and Journeys of the world – if you want to know what love is, don’t stop believin’ in FM, because quite simply no one can touch them at this.