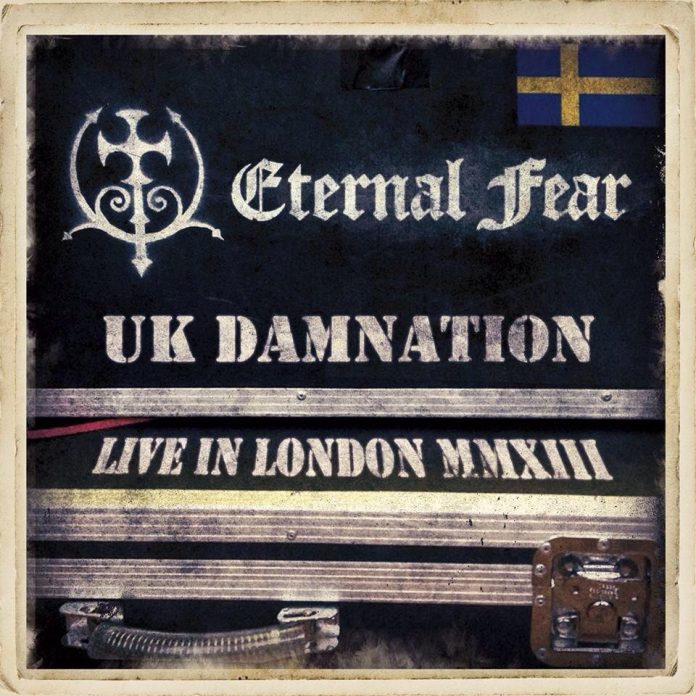 Often derided, but often great. It is odd isn’t it, just how many great live records there have been, and just how easy it is to dismiss them as a cash-in.

Go on, just think: “Live After Death,” Thin Lizzy’s seminal “Live And Dangerous” even Kiss’ “Alive” the live record has enjoyed a rough ride over the years from critics, but it is totally unjustified.

We spoke to EF guitar player Mattias recently and he quickly picked Lizzy as his favourite. This is important for many reasons, not least because it shows impeccable taste, but also just why this record is so important to the band.

The band are totally enthralled with British heavy metal, outfits like Maiden and Priest are those that EF aspire to be. Which is precisely why this album documents their first appearance in London.

Indeed, there is a joyful explosion here that is impossible to deny. The set is heavy on tracks from their most recent “Eternal Damnation” album. The title track in fact begins proceedings, while there are a few tracks from a record that isn’t released yet, of which “Killing Time” is perhaps the pick.

Such is the quality of EF’s material that there isn’t a duff track here, “Embracing Darkness” rolls along like prime Maiden, “King Of Sorrow” features some superb drumming from Stefan Almqvist, and “Final Stand” has a haunting opening before cutting loose, it is perhaps their most Dio like moment.

The set ends with “Away” and the band clearly enjoyed it, given it’s gleeful crescendo. The fact is that Eternal Fear are one of those bands you want to succeed, the sort for whom you think music and only music matters.

“UK Damnation” is a fine document of a fine band fulfilling a dream and sometimes that’s all it needs to be about.