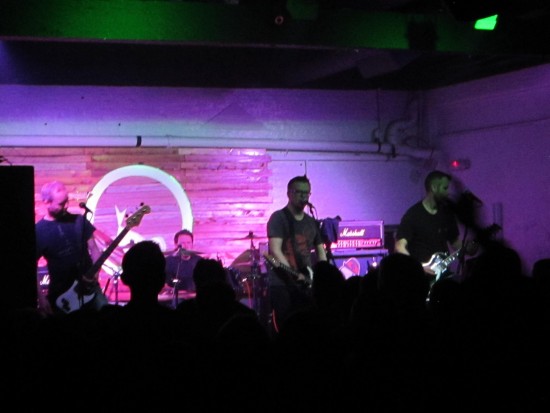 Cormac Battle and his mates are back. And Damian was there to watch.

Hawk Eyes from Leeds. The band formally known as ChickenHawk let their music do the talking. Not much chat between songs just straight on with the music like “Witch Hunt”, “Kiss This” “Let Your Hair Down”. A mix of stoner. Sludge, extreme, avant-garde, experimental and alternative rock. Something to please everybody. “Die trying” the bands new single is given an airing and was showcased on BBC 6 music today. The set closes with “I Hate this, Do You like it?” Well yes I did, very much so,

So on to the Headliners Kerbdog, who were originally formed in Kilkenny back in 1991. And who then became Wilt (sort of). Now they are back, back, back.

On they come and straight into “Pledge” then “End of Green” before pausing to congratulate the audience on being already better than the audience at their last shows at Southampton and Plymouth. It’s grim down South they say.

“Mexican Wave”, “Pointless”, “Rewind” and “Earthworks” all swiftly follow. Cormac shares with us that his mom came over to these parts in 1955 to work at the Morris Minor factory so he has an affinity with Brum.

Kerbdog to me sound like a mix of Nirvana, Foo Fighters, Therapy? and Metallica, all good bands who apart from the Foo Fighters, emerged around the same time as these guys. “Dry Riser” follows and the boys apologise for the lack of disco lights in the venue. ““On the Turn”, “Secure” and “Severed” are played before the set closes with “Sally”. As time is running out we get a three song encore of “Dummy Crusher” a new number called “Electricity” and to round things off “JJ`s Song”.

Most of tonight’s set can be found on the recently released live album “Congregation” – their first since 1997. Buy It may encourage the guys to come back and entertain us with another superb show in the not too distant future.