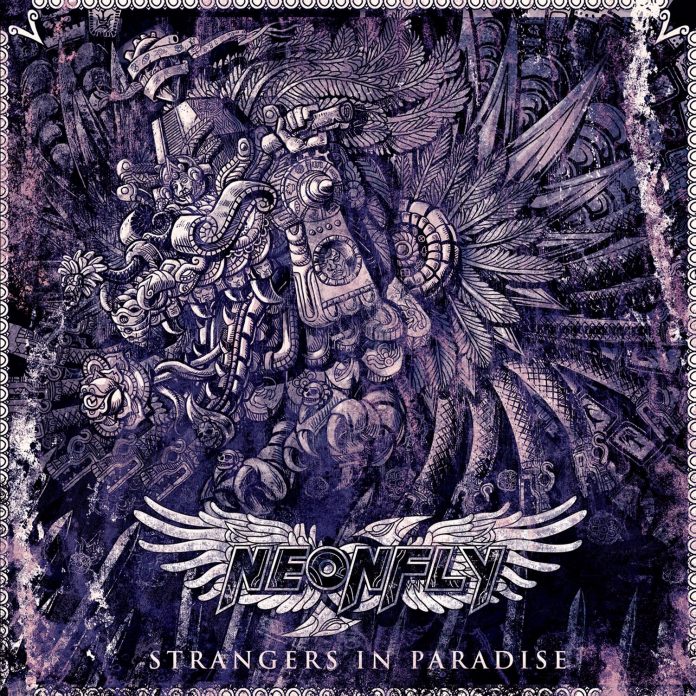 Album number two from the London melodic rock Kings. We resist the urge to call them the new Magnum, and instead get excited.

They say people love an underdog. They also say that patience will be rewarded and the more you practice the luckier you get.

Neonfly can perhaps look back on the last three years and think that perhaps that they ring true.

To backtrack a little, in 2011, the five piece released their debut full length album “Outshine The Sun” which was quite superb. Then the band set about playing live. A lot. Again and again you would turn up at something to find Neonfly as the opening act. Never giving a bad show, it seemed, the band instead just looked upon the fans of bigger acts – and one of them was Alice Cooper if you don’t mind – as a chance to gain a following for themselves.

On one of these jaunts they met Dennis Ward in Germany. Once of Pink Cream 69, now in Unisonic, Ward is also a producer of note. This explains two things. First why it took three years for a follow-up, and two why it sounds so good. Clearly a work of great importance to the band, you sense that everything here has been planned to the last degree.

The result is a record that takes the best bits of “….Sun” and builds on them in the best way possible.

Where the debut was a document of band that was striving for perfection and to find its place, then “Strangers In Paradise” is the sound of one that has spent the last three years knowing exactly what it wanted.

The music here soars, opener “Whispered Dreams” makes this point succinctly, basically packing everything the band have learnt recently into a neat package.

Indeed for all it’s widescreen intentions – and lead single “Heart Of The Sun,” with its orchestration, echoes a Hollywood film score – “….Paradise” is Neonfly with the fat trimmed off. 10 songs, and less than 50 minutes, there is nothing bloated about the power metal here.

It’s also in places an album that is heavier and darker than previous work indicated. “Highways To Nowhere” would not be out of place on a Symphony X cd, while “Fierce Battalions” is, as it appeared when it was aired on their recent trek with Dragonforce, their heaviest track to date.

When they want to, Neonfly can still do sensitive, though, and “Rose In Bloom” is one great big enormous tear jerker. If rock music still made the charts would have “huge hit” writ large all over it, while album closer “Falling Star” does lilting exceptionally well.

A massive sounding record that will, if there was any justice in the world, make Neonfly massive too. “Strangers In Paradise” is a band showing real growth and making what you suspect is the absolute best record they could do right now.