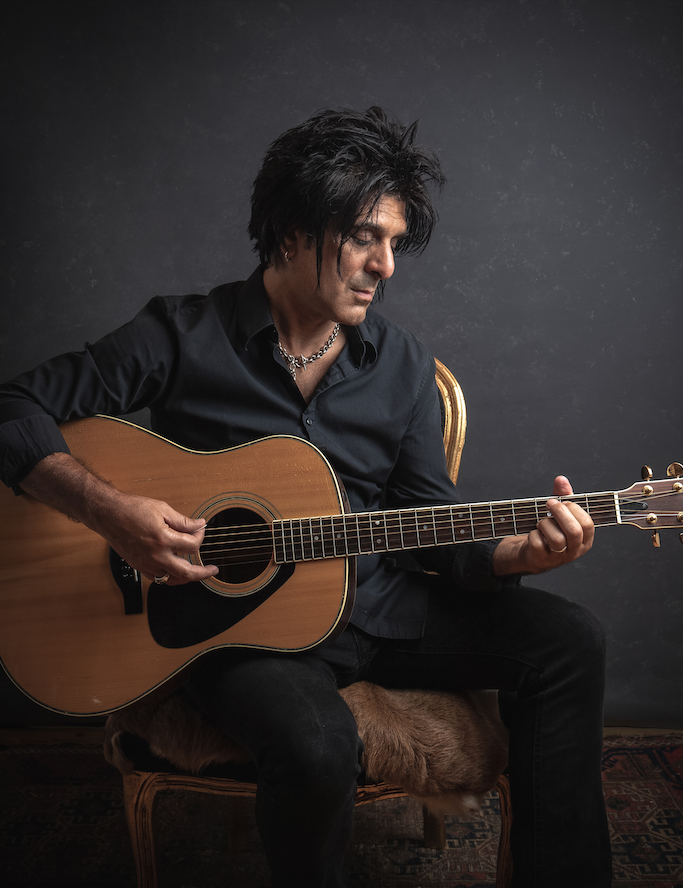 Steve says, “(“Overnight Smash”) is about professional jealousy. Once somebody starts ‘Getting Somewhere’ in their career, there is always that crowd that, for whatever reason, got left behind in the dust. And then they like to shit-talk about ya.”

Long known for his memorable guitar work as a member of New York Dolls, as well as former Hanoi Rocks frontman Michael Monroe’s band (with whom he still performs), Steve found international fame in recent years via his collaborations with Japanese composer and artist Yoko Kanno on the soundtracks to several hit anime series, including Cowboy Bebop.

Of the album’s title, Conte says, “A ‘Bronx cheer’ is what we also call a ‘raspberry.’ Sticking out your tongue and blowing air to make a fart sound. The title for this album works on many levels. First is the fact that I moved to The Bronx five years ago – and I’m lovin’ it! But it all came together when I found the photo, which is on the album cover, of a group of high school kids marching down Fifth Avenue protesting the election of Donald Trump. So not only is the lead kid, Theo Fenton, raising his fist in protest, contrasting the word ‘cheer,’ the title also gives Trump a big fat raspberry!”

Bronx Cheer is brimming with the spirit of New York both past and present. “I remember the danger, dirty streets, the garbage strike, sleazy 42nd Street,” Conte recalls of his first visits to the city as a kid in the 1970s. “When I moved here in the mid-1980s it was not all that different – but it’s very different now. Yet somehow, I still love it – and hate it. To me, that’s what the Blues and Punk Rock have in common – complaining!”_

The album’s 11 tuneful new songs, all written by Conte (with one co-written by Brynn Arens) swing like a citified update on Paul Westerberg or Old 97’s. The first single “Recovery Doll” is a fast-paced tale of excess that traces a descent from fun times to darker spaces. “Wildwood Moon” and “Dog Days Of Summer” are bursting with hot-weather nostalgia and shimmering production. “Liar Like You” is an unabashed Punk rave-up.

The core of Bronx Cheer consists of Steve on guitar and vocals with bass by his brother John Conte (Southside Johnny & The Jukes, David Bowie, Ian Hunter) and the renowned Charley Drayton (Keith Richards, Iggy Pop, The Replacements) on drums.

“I knew I wanted to make a straight ahead Rock and Soul album with New York attitude, but I didn’t want the approach of the drummer to be predictable or normal.” Steve explains. “Charley brings a certain quirkiness to a track that no one else would think of. And John was the only bass player I even considered having on this record.”

Conte produced the album with Andrew Hollander, who in addition to work with Indie bands like White Rabbits has also composed and/or produced with Pop stalwarts like The Chainsmokers and Carly Rae Jepsen. “A lot of times Andrew was the tiebreaker between two different parts of my mind, like when I was wondering if I should play a 12-string solo or use a wah-wah pedal.”

Tracking for the album began in September 2019 at Atomic Sound in Brooklyn. Overdubs were completed by February 2020, and the album was mixed during the pandemic by Niko Bolas (Neil Young, Keith Richards, Don Henley).

Album closer “Gimme Gimme Rockaway” is the one song which had been released prior to 2021, having found success and “Coolest Song In The World” status on Little Steven’s Underground Garage as a 2017 single. For that track, the band consists of Conte with Clem Burke of Blondie on drums and Andy Rourke of The Smiths on bass, with Wicked Cool labelmate Jesse Malin on backing vocals.

Raised in a musical family – Steve’s mother Rosemary Conte is a noted NY/NJ jazz singer – Steve started spending time in New York City as a kid, his father bringing him to his first Madison Square Garden concert, by none other than Chuck Berry. Some years later, Conte found himself playing an entire show onstage in Berry’s band. His own music first gained notice when his band Company Of Wolves signed to Mercury Records, releasing a self-titled album on the label in 1990. Over the years he’s also worked with Peter Wolf, Eric Burdon of The Animals, Willy DeVille, Billy Squier, Willie Nile, Maceo Parker, and even been Paul Simon’s tour rehearsal vocal stand-in.

Conte first met Wicked Cool founder Stevie Van Zandt when the Dolls played Van Zandt’s Underground Garage Festival in 2004. “But my connection with him goes back to Jersey,” he says. “I grew up with his cousins in Matawan [near the Jersey shore], so I had been hearing about his legend for years.”