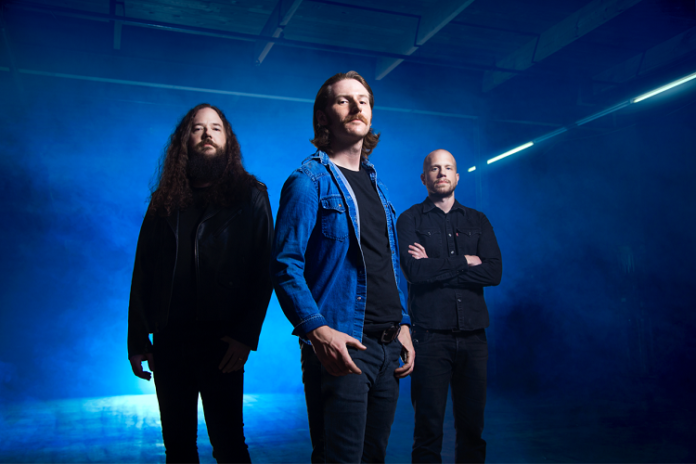 Doomed heavy metal outfit KHEMMIS will make their long-awaited return this autumn with their fourth full-length album, Deceiver. Set to be released on November 19th via Nuclear Blast, their first record in over three years is their darkest release to date. Today, the band have also revealed a music video for the first single, Living Pyre.

Living Pyre signifies far more than just the beginning of another musical endeavor for the band; it is a substantial benchmark for emotional struggle and growth.

Guitarist/vocalist Ben Hutcherson comments:
“When it comes to my own mental health, when I’m in a bad place, I can’t access the part of me that creates art. After reaching that understanding of myself, the bulk of this song came out in one sitting. I was feeling stable. I was feeling hopeful – even though so much outside in the world was not exactly inspiring. All of us needed a reason to feel a glimmer of hope.”

Describing the thematic elements of the new record, vocalist/guitarist Phil Pendergast says: “Thematically, all of the songs are about the many ways that we are tricked into believing these stories about ourselves–that we are broken, that we are not good enough, that our genetics determine our fate. This title is the label that we put on our minds as a force that tricks us into believing these stories. The record’s lyrical trajectory is similar to Dante’s descent into an Inferno of his own making. It is our darkest album to date.”

Hutcherson adds:
“While our minds and hearts are responsible for this kind of deception, so too is the world around us. There is this dialectic between the two that produces suffering. Anyone who has struggled with mental health or suffered any sort of trauma will tell you that there were times that the mind is its own beast that has to be wrangled. In that sense, we become the deceivers ourselves; we believe we deserve to be the vessel for this pain and this suffering that is being inflicted on us both externally and internally.”

Restlessly awakening from the depths of a feverish slumber, doomed heavy metal masters Khemmis return to reveal their fourth full length studio album Deceiver, arriving via  Nuclear Blast Records in November 2021. Six tracks of desolate, soul-awakening heaviness encapsulate a project that has been nearly three years in the making. With a title that reflects the internal struggles that many of us battle in our daily lives, Deceiver is a ferociously honest and appetisingly raw piece of musical artistry.

While the lyrical themes of Deceiver – sorrow, pain, longing for hope – will no doubt be familiar to longtime fans, these six songs display a broader collection of musical influences than on any other Khemmis record to date. “It being our 4th album, especially after the transition between the last two albums, it felt really freeing. We felt that we could really do anything on this record,” explains drummer Zach Coleman. “There’s a lot here that we’ve never done before,” adds Pendergast. “In some areas it gets darkly psychedelic. I think we found a cool way to mutate things using transitions that feel really natural. There is a subtle symmetry between the first and last songs which is one of the things that makes listening to the full album a satisfying holistic experience. It builds from almost nothing, becomes very dark, and then you slowly crawl out of that lowest circle of hell.”