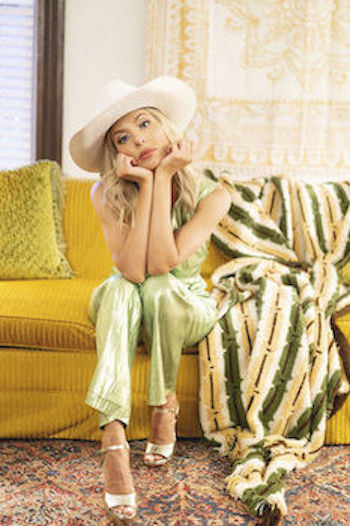 Big Loud Records’ Country riser MacKenzie Porter releases track one in a series of new songs to come with ‘Unlonely Me.’ Penned by Porter herself, along with Nick Bailey and Craig Wiseman, the song is a light and sunny ode to wanting to rekindle a former flame. The infectious Country track invites kittenish nostalgia.  “I wrote ‘Unlonely Me’ at the very start of quarantine in 2020,” explains Porter. “I was super resistant to write over Zoom because I’m very much an ‘energy in the writing room’ person, but when I jumped online with Craig Wiseman and Nick Bailey, I started playing those chords and this song just kind of fell out. We wrote it about the beginning of a relationship, but for me personally, it was about feeling pretty lonely at that time. I can’t wait for y’all to hear it.”

This song comes on the heels of the launch of the BUY DIRT TOUR with Jordan Davis at The Fillmore in Minneapolis, MN. Performing ‘Unlonely Me’ for the first time live last night, Porter is tapped as support for the tour this fall. From Minneapolis, she will start the three-month club run across the country, stopping at legendary rooms such as Webster Hall in New York City and Joe’s Live in Rosemont, IL. Check HERE for a full list of tour stops. Porter also recently released a new Amazon Original cover of Natalie Imbruglia’s ‘Torn.’ Featured on the playlist cover, Amazon Music listeners could find Porter’s cover of ‘Torn’ on the highly coveted Breakthrough Country playlist. They could also find her on Canada Now, Amazon Music’s playlist celebrating the best new Canadian music.  The 2021 JUNO Award nominee for Country Album of the Year is also featured on hitmaker Dustin Lynch’s current single ‘Thinking “Bout You that is quickly climbing up the U.S. Country radio charts. About to knock on the doors of the 20s, this song has shown itself to be a massive hit. Selected by Lynch during a blind audition, Porter delivers her signature “girl-next-door vocals” that “cut like a blade” (Billboard). Recently wrapping her 2021 extension of THE LOFT SESSIONS, directed by Caleb Donato and shot at the iconic Bluebird Café in Nashville, the series originally launched in 2019 with ‘These Days’ and continued in January of 2020 with a cover of Alanis Morissette’s ‘Hand In My Pocket.’ With Nashville taking notice of her “authentic heart” (American Songwriter) as well as “her mesmerizing vocals and hook-driven songs” (Billboard), Porter was also inducted into CMT‘s Next Women of Country Class of 2021, joining an elite sisterhood of trailblazers and tastemakers.

ABOUT MACKENZIE PORTER: Signed to Big Loud Records, Porter is surging now with headline-making “Thinking ‘Bout You” collaboration with Dustin Lynch at Country radio, plus her own DRINKIN’ SONGS: THE COLLECTION – an arsenal of two years’ worth of new music produced by Joey Moi. Since moving to Nashville in 2014 from her native Canada, she’s developed a radiant Country style which threads the needle between traditional heart and modern energy, often collaborating with songwriting mainstays like Nicolle Galyon, Craig Wiseman, Natalie Hemby, and Tommy English. Her “mesmerizing vocals and hook-driven songs” (Billboard) have sparked a list of headline-worthy accolades, including multiple Canadian Country Music Award nominations – 4X Female Artist of the Year, Songwriter of the Year and Fans’ Choice – as well as 2021 and 2015 JUNO Award nominations, both for Country Album of the Year. Making her mark, Porter became the first female artist to have three back-to-back #1 singles at Canadian Country radio in 22 years with “About You,” “These Days” and “Seeing Other People” in early 2020, following Shania Twain in 1998. Porter also earned her first crossover Top 10 at Canadian Pop radio – a first since 2003 for a Canadian Country artist – with “These Days (Remix),” and joined CMT’s elite sisterhood of tastemakers and trailblazers as one of their Next Women of Country class of 2021. The Pandora 2021 Country Artist to Watch has toured extensively on her own, also sharing stages with Kenny Chesney, Rascal Flatts, Chris Lane, Blake Shelton and Dallas Smith, and co-starred in the Netflix series, Travelers. Here newest release “Unlonely Me” is part of a series of new music to come.