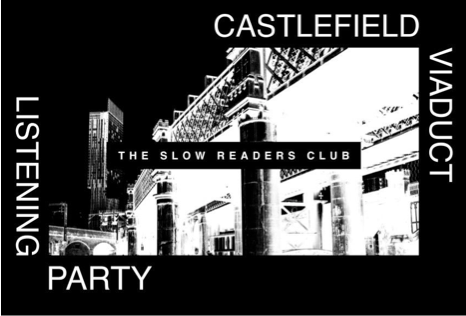 The band will be joined onstage by Slow Readers Club fan and Mayor of Greater Manchester, Andy Burnham, as they listen through each track and discuss the story of the new album. 20 competition winners and selected press will make up the audience, with a Q&A taking place at the end of the listening party where the audience will have the opportunity to ask questions to the band, Chris or Andy. Fans can enter the competition by pre-ordering the record from the band’s online store HERE.

In order to raise charitable funds and to commemorate the occasion, the band will create a limited edition TSRC X Castlefield Viaduct t-shirt, which they will sell at the event and on the band’s online store. All profits will go to the National Trust’s Castlefield Viaduct fund, to support planning a greener future for Castlefield Viaduct which will benefit the great city of Manchester and everyone who visits, lives or works here

The Slow Readers Club also recently added a very intimate show at The Met in Bury as part of Independent Venue Week, which quickly sold-out. Ticket demand for the remainder of the tour is also strong, most notably with a homecoming show at Manchester’s Albert Hall, which sold-out four months in advance. Remaining tickets for the tour are available HERE. The dates are:

Previous article
ON THE MONEY
Next article
GET BETTER