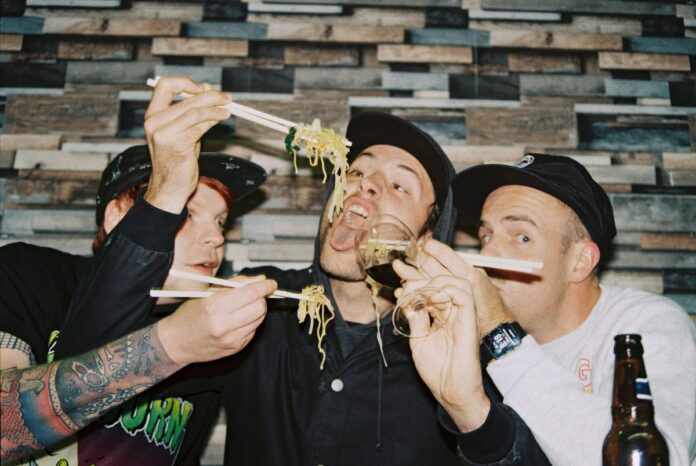 Brighton alt-punk trio ALL BETTER have revealed the video for their new single ‘Lately’, the final track to be taken from their debut album How To Be Alone, which was released last year via Sugar-Free Records.

The band recently announced that they will be calling it a day later this year, but in the meantime have announced ‘The Big Goodbye Tour’ UK headline dates running through February 2023.

A final hurrah following their plans to disband, All Better return to form one last time with the type of music video they’ve become known for—a fun and energetic reminder to fans of exactly what they love about the band ahead of their final tour. Filmed by Brighton videographer Luke Bateman and edited by the band themselves, it sees All Better showing Brighton Youth Centre exactly how not to play basketball.

Commenting on the track, the band said: “‘Lately’ is a time capsule from a period of a lot of self reflection and moaning in Nick’s life—writing a song about a problem as a form of therapy, only to realise all that process achieves is singing about something but not resolving the problem itself. It doesn’t hold any answers, it’s just noticing the ins and outs of thinking too much.”

Following tour dates in early 2022 with TRASHED, the band toured the UK with Hampshire punks Buds. along with a string of June 2022 UK headline tour dates and an appearance at Bristol Booze Cruise Festival.

Debut album How To Be Alone was released in Spring 2022 and picked up early support from online tastemakers at GIGWISE, Maximum Volume, The Punk Site, That’s Good Enough For Me, Alt Corner, Glasgow Punks, Undercurrent BTN and more.

In an official statement on social media regarding the forthcoming split, the band said:

“Alright, listen up—we’ve been doing All Better for five years and we’re going to call it a day after the February tour. We’ve loved it, playing in a band with your mates is great. But we are getting old, and at some point when you reach the age of wisdom we have, you start to think maybe spending some time on the sofa watching Big Mouth isn’t all that bad.”

“We’ve had some of the best times of our lives playing in this band and can’t thank you all enough for your support over the years but we’d rather go out on a high than let it fizzle out like a fart in the wind. So we’re quitting whilst we’re ahead(ish).”

“So that’s it. Rubba dub dub, thanks for the grub.

ALL BETTER’s debut album How To Be Alone is out now.