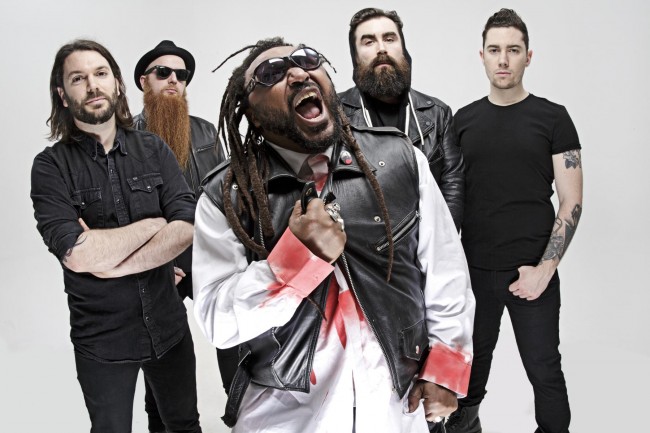 New one comes with special DVD

SKINDRED are pleased to announce a documentary that was 17 years in the making entitled ‘Rude Boys For Life’ which is an exclusive bonus DVD for the band’s limited album edition of ‘Volume’ due out on October 30th 2015 on Napalm Records!

The limited Edition Digipak  can be bought here. ‘Rude Boys For Life’ looks at life on the road, its ups and downs, celebrations, festival appearances and headline shows, studio access and their Polish Woodstock headline show where the band played to over 1 million people.

Directed by Band member Dan Sturgess ‘Rude Boys For Life’ offers a revealing and exclusive behind-the-scenes look at one of rock music’s best live bands. Taken from over 1000 hours of footage filmed by the band over their 17 year career, Skindred’s Rude Boys For Life chronicles the band’s rise: through the making of all six studio albums, including the new album, Volume, to exclusive, unseen, behind the scenes footage of five world tours; through the early days – touring the USA in a van, to the birth of the now infamous Newport Helicopter at Download Festival 2011, culminating in their headline set to a million people at Polish Woodstock.
A must for any Skindred fan, gain unparalleled access in to the band’s life on the road, and hear them talk candidly about the highlights, the pitfalls, and how they’ve maintained inter-band relationships over the course of their career.

After a sold out Arena run with Steel Panther, a remarkable Camden Rocks performance, two sold out Hit The Deck headline slots and a host of European festival shows (including Wacken, Rock Am Ring and Rock Im Park in Germany with Foo Fighters and Slipknot) already in 2015, Skindred announce a UK November headline tour with Crossfaith & Hed PE as support.

The bands 6th studio album, entitled ‘Volume’, will be the bands first release on Napalm Records. The album was recorded at The Strongroom studio in East London and was produced by longtime collaborator James ‘Lerock’ Loughrey (previously worked with the likes of White Zombie, Depeche Mode, Manic Street Preachers).

“Pump Up The Volume” UK Tour