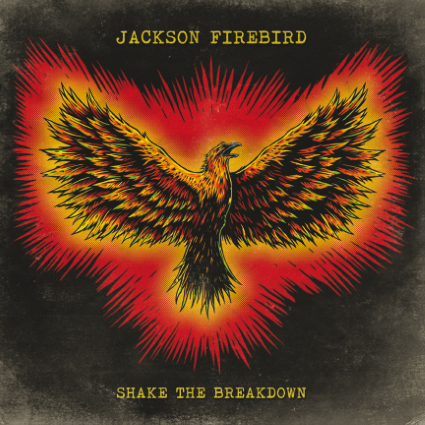 Right from the exact moment (and who the hell cares if this story is true – it’s just cool) that Robert Johnson trotted down to the crossroads and did a deal with Beelzebub that involved selling his soul to start the Blues, baby, there’s just something fantastically primal about rock n roll.

From Elvis shaking his hips on TV and scaring a nation shitless, to The Sex Pistols on Reg Grundy doing the same, or Kurt on The Word tapping into what the youth were waiting for a generation (x) later, rock n roll has got have some kind of rawness if it’s going to survive. Not everything can be some chin stroking, clinical exercise in musicianship. Sometimes you just gotta turn it up to eleven and beat the living crap out of your drum kit.

Which Aussies Jackson Firebird understand. Maybe it’s because there’s only two of them that they have a need to keep things simple, but that’s exactly what they do. There’s very little in the way of complexity here, instead it’s loud and it grooves like the filthiest thing you’ve ever heard. Like the chanted line in the opening “Mohawk Bang!” Says, “bang it out, bang it out proud.”

When the two reprobates (we assume) behind this, Brendan and Dale, lock into a riff, they more than live up to the promise on the brilliant “New Wave” to be “streaming like a freight train, rolling down a mountain” at other points, primarily on “Get Away” they take the work of The Vines, imagine they were jamming with Black Label Society and see what comes out the other end.

They clearly know their history too, “High Love” starts like an earthquake and then proceeds to be a thrashed up version of Chuck Berry, is visceral and exciting, the dirty delta blues of “Sin For Loving” is the soundtrack to a party that would end in a very messy way and the title track? Well it could crush small buildings – and most probably would too, just for a laugh, while”Headache Mantra” has echoes of long forgotten Brit rock and rap crossover merchants Grand Theft Audio and whoever the character in the song is a “bad muddyfunster.” Or something.

There’s just once when “…..Breakdown” doesn’t work. You’d imagine “The Clapping Song” is intentionally dumb, but this record is too good to bother about it too much. It even manages to drop the pace for “Sick n Tired” as if understanding the consequences of all this hedonism. It provides some valuable contrast.

Largely though, “Shake The Breakdown” is little short of a white-knuckle, roller-coaster ride to Funsville. Ye gods, there’s even a cover of Queen’s “Fat Bottomed Girls” that doesn’t suck. And if you can make Freddie’s boys palatable then you must be gifted.

Break it down however you damn well please and this record is a superb slice of loud, nasty rock n roll. If such a collection has a mission statement then surely it comes on “Devils Door.” A line that’s tossed out in its first verse provides the insight that “I’m not scared of dying, just growing old,” and that means everything is in order in the world of rock n roll.