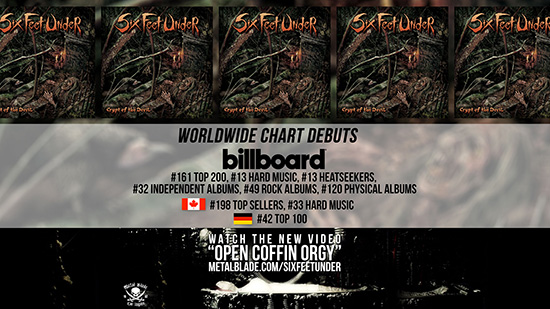 Crypt Of The Devil, the latest platter of brutality from iconic death metal merchants, SIX FEET UNDER, crushed the Billboard charts this week debuting at #13 on the Hard Music Chart, #13 on the Heatseekers Chart, #32 on the Independent Albums Chart, #49 on the Rock Albums Chart, #120 on the Physical Albums Chart and #161 on the Top 200 Current Albums Chart! In Canada,Crypt Of The Devil placed at #33 on the Hard Music Chart and #198 on the Top Sellers Chart. On the Official Top 100 Charts in Europe, the record earned the #42 in Germany marking it SIX FEET UNDER‘s highest charting record pillaging Bringer Of Blood‘s German entry at #36 and True Carnage’s entry at #40. Additionally, Crypt Of The Devil nabbed the #20 spot on the Media Markt/Saturn Charts!