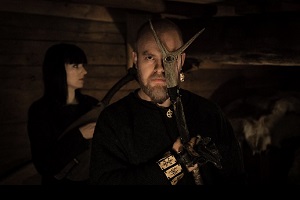 And he’s bringing an orchestra along

Einar “Kvitrafn” Selvik of Wardruna joins Trevor Morris and his orchestra on stage performing music from the tv show”Vikings”at  Krakow Film Music Festival on May 30th!

With their magical Norse tunes, Wardruna has mesmerized the entire world. In 2014 they won the price for Best Underground Band at the Metal Hammer Golden Gods, and their music is the official soundtrack to the successful History Channel TV-series “Vikings”, where Wardruna main-man Kvitrafn also joins in on the list of actors. Wardruna is, simply put, the musical bond between our modern world and the Norse roots to the Vikings.

In the ensuing years, the group have spent a lot of time on adapting their music to a live format and establishing a live band. This resulting in a handful of very special concerts, perhaps most notably when they performed in front of the majestic 1100-year-old Gokstad ship at the Viking Ship Museum in Norway.

With the use of the oldest of Nordic instruments and poetic metres, as well as lyrics written in Norwegian, Old Norse and Proto-Norse tongue, Wardruna has released the two first albums in the Runaljod trilogy; gap var Ginnunga and Yggdrasil. With the latest release Yggdrasil, multi-instrumentalist and songwriter Einar Kvitrafn Selvik has together with vocalists Kristian Espedal (aka Gaahl) and Lindy-Fay Hella, managed to make strikingly beautiful and intense continuation of what started with their first album, but without falling into the trap of merely repeating themselves. Yggdrasil is also graced with guest appearances by renowned Icelandic composer Hilmar Örn Hilmarsson and Iceland’s leading rímur singer Steindór Andersen.

The ongoing ‘Runaljod’ trilogy is a musical rendition of the 24 runes in what is often referred to as the elder futhark. Some of the recordings are done outdoors in places or under circumstances of significance to each rune. Wardruna primarily use old and historical instruments such as primitive deer-hide frame drums, Kraviklyra, tagelharpe, mouth harp, goat horn, lur and more. Non-traditional instruments and other sources of sound like trees, rocks, water and torches are also used.

All of these elements are carefully woven into a rich musical landscape and complemented with whispering voices, melodic song and mighty choirs. Although Wardruna’s music share characteristics with music typically labeled as folk, world and/or ambient, none of these genres can really describe their unique style. It truly must be experienced.