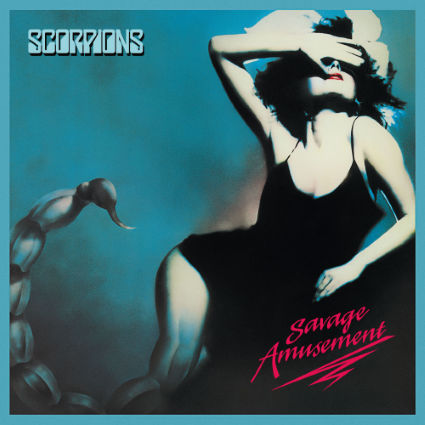 And finally, its 1988 and they bring this belter out. The albums are released today

Expectations of them were sky high when the Scorpions entered the studio to record the follow up to the hugely successful albums LOVE AT FIRST STING and WORLD WIDE LIVE, yet the band were not in a rush. Instead, it took the Scorpions almost three years before they finally released  SAVAGE AMUSEMENT. The album surprised fans and critics alike, not least because of the musical changes it introduced. Some were subtle, others less so.

SAVAGE AMUSEMENT documents the band’s ability to react to changes in the musical landscape as well as their willingness to experiment. SAVAGE AMUSEMENT turned out to be yet another brilliant album from a great band. Since its release on 16 April 1988, it has proved to be yet another global success for the Scorpions and became the sixth consequent album to go platinum. Its release was followed by a ground breaking world tour.
To celebrate their 50th band anniversary, the Scorpions are releasing a CD/DVD Deluxe Edition of SAVAGE AMUSEMENT. The high quality Digipak contains the newly remastered original album tracks and also six unreleased bonus tracks. “Taste Of Love”, “Edge Of Time”, “Don’t Wait Too Long”, “Dancing In The Moonlight” and “Fast And Furious” are thrilling demo takes, while “Living For Tomorrow” is a song that was first recorded live in Leningrad on 26 April 1988.
The DVD is packed with exciting clips and documentaries. In spring 1988, the Scorpions were the first Western rock band ever to venture into what was back then the USSR. They played ten sold out shows in Leningrad (today’s St Petersburg). “To Russia with Love and other Savage Amusements” documents the journey and offers some fascinating insights into a world that has since perished into the pages of the history books.  Further bonus videos include clips of “Rhythm of Love”, “Believe in Love” and “I Can’t Explain” as well as an exclusive interview documentary  in which the musicians talk about the recording of SAVAGE AMUSEMENT.
An extensive 16 page booklet rounds the package off. It features liner notes written by Edgar Klüsener, a former editor of Germany’s Metal Hammer, and photos, single covers and images of backstage passes.
The LP comes in an original replica version with the CD in paper sleeve incl. all bonus tracks.