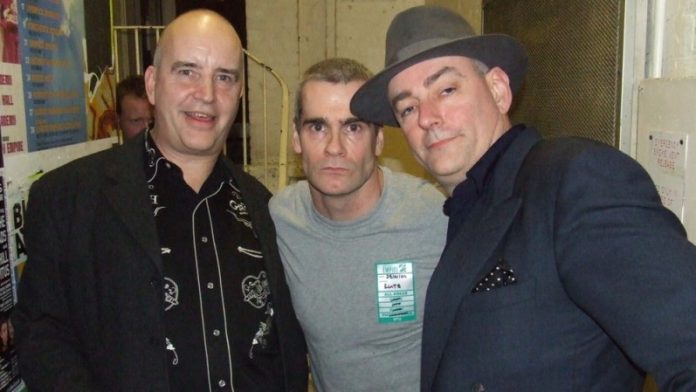 And look who is helping them
Team Rock has premiered the second video from Ruts DC’s forthcoming new album, Music Must Destroy.  The video features Henry Rollins singing along with the band on the album’s title track.  View the video HERE.
Music Must Destroy is the first rock album from legendary punk band Ruts DC since the release of 1981’s  Animal Now.   It finds original bassist John “Segs” Jennings and drummer Dave Ruffy blazing forth with their perfect mix of punk, rock, and reggae.

Segs comments, “we’ve been writing over the last year or so as we’ve been touring around.  We’ve been inspired by the newly found interest in what we’re doing and the many live shows we’ve done.”  Discussing the album’s creative process, Segs details, “we recorded all the backing tracks live at Pat Colliers London studio.  Pat has engineered the sessions while our friend James Knight co-produced.  We have also been doing work with Greg “Wizard” Fleming at his studio in Brixton.  Lee Groves in Nashville has handled final mixes.”  With some work still left on the recording, the band recently confirmed they reunited with artist John H. Howard for the album’s cover art.

With guitarist Leigh Heggarty completing the line-up, the band released the first single/video from Music Must Destroy in mid-June.  “It’s been a long time coming but the time has never been so right,” shares Segs.  “Psychic Attack” has already drawn early acclaim with Louder Than War noting, “it’s probably the best three minutes of punk rock ‘n roll you will hear all year.”

(Originally) The Ruts formed in London as a reggae-influenced punk band in 1977.  Of their six initial singles, it was their second – “Babylon’s Burning” –  that reached No. 7 on the UK Singles chart.  Their full-length debut, The Crack, was released in 1979.  Henry Rollins calls it “the best album ever made.”  Sabotage Times called it “a debut album of unparalleled greatness.”

With a second Peel Session recorded and a UK tour completely sold out in advance, it was a great time for the band.  However that quickly changed with the the tragic death of original vocalist Malcolm Owen in 1980.  Jennings and Ruffy continued on as a trio with guitarist Paul Fox – now as Ruts DC.  Despite growing acclaim, the band folded in 1982.

The band reformed in 2007 to play a benefit for Fox, then battling lung cancer.  Henry Rollins would sing for this now legendary show which included performances from The Damned, UK Subs, Tom Robinson, and the Peafish House Band which featured Lee Harris (The Blockheads), Tony Barber (Buzzcocks), and Rowland Rivron.  Fox died on October 21, 2007 at the age of 56.

Now in 2016, Ruts DC are as fresh and vital as they were in their youth.Ruts DC will perform at the 20th Anniversary Rebellion Festival in Blackpool on August 6 and a special show is planned at London’s Underworld on September 16 to celebrate the album’s release.

“The Ruts are back in black – with hats… great sound, true to what so many of my old muckers are feeling these days.” – Pete Townsend/The Who