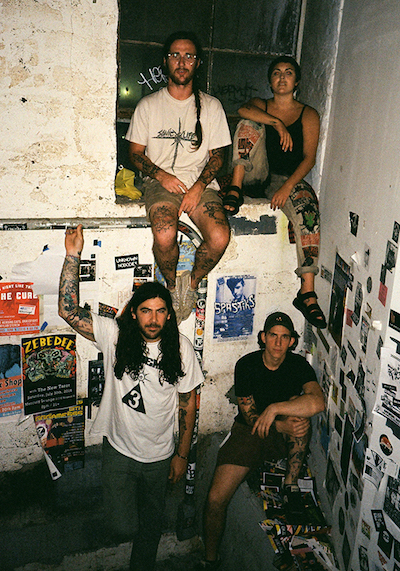 Album out today, here;s the skinny
Neaux formed in Brooklyn, NY by coincidence and fate. Their partnership began with Sierra Kay (VersaEmerge) andNick Fit’s (Trash Talk, Loss Leader) previous groups appearing at the same festival. “[He was] some kid sidestage at all our shows,” reminisces Kay, and a musical and personal bond formed. They describe themselves as “old friends making new noise”, but what a potent noise – Kay’s expressive vocal approach meets songs that give a nod to shoegaze and Sonic Youth in equal measure.  Joined by Ryan Briggs on bass (Have Heart) and Chris Peters on drums, Neaux is An alt-rock band rich in atmosphere and songcraft.
Take Fell Off The Deep End album opener “Slowstroll,” which announces itself immediately with both delicacy and heaviness; there’s a weighty crunch to the sound that recalls 90s grunge and alt-rock. Yet, Kay’s clear and expressive lead vocal ensures fans of Slowdive and PJ Harvey can find space in this music. Elsewhere, the young band ably conjures up druggy, droning balladry (“High Hopes”) and catchy post-punk (“Beaten Bruised and Over It”). The band’s hardcore background shows up, too, like when the pummeling “Somewhere Up North” kicks up the tempo several notches.

Guitarist and songwriter Nick Fit says, “We all come from very different musical paths. Ryan and I come from the world of hardcore and punk, which is rooted in a raw and often dirty presentation, Sierra from a more cleanly produced version of pop rock. It may seem like a weird combination but it feels normal and totally organic. Once you discover someone has a similar outlook it’s easy to create with them.

Writing these songs was easy, fun, and natural. I listen to all types of music, everything, and that’s what comes out in the songs. Then when Sierra recorded vocals the songs took on another life. Afterwards we both felt like we had something that was uniquely us.
We’ve all been in bands and have toured a lot, so it’s cool to get this gang together because all that matters to us is playing live, writing, and recording music that makes us feel good and having a damn good time while we’re doing it. You can expect to see us on both coasts soon.”
The members cut their teeth in diverse genres  – experimental, synth pop, straight-edge hardcore – but Fell Off The Deep End is a rewarding collision of worlds. Far more than simply another one-off in a discography full of them, this engaging 8-song release establishes Neaux as a band to look out for in 2016.
Listen to Fell Off The Deep End in its entirety now on AltPress.com.  The album will be out September 16th fromIron Pier.
FELL OFF THE DEEP END, TRACK LISTING:
1.  Slowstroll
2.  Somewhere Up North
3.  High Hopes
4.  Only Lonely
5.  Make Me Stay
6.  Beaten Bruised and Over It
7.  Deep Dive
8.  Sorry I Said It