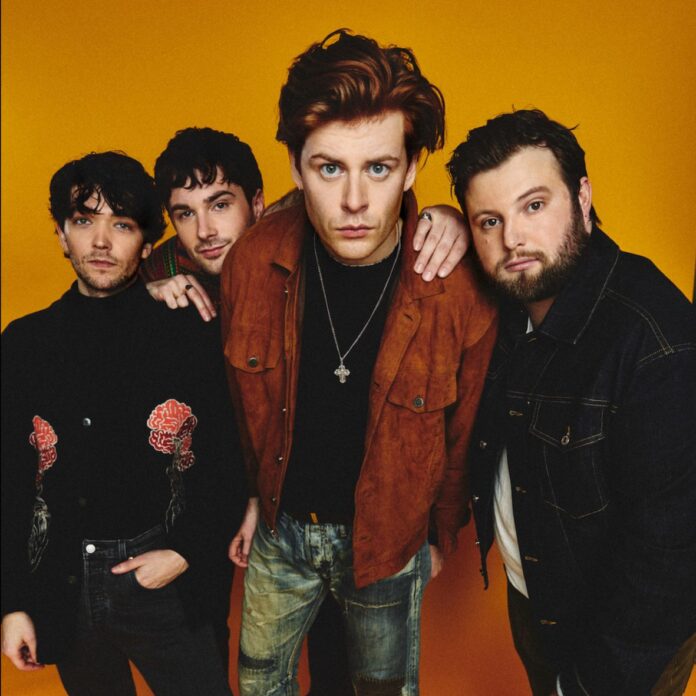 The third record is both a love letter and a rallying cry. Expansive, uplifting, sun-drenched singalongs produced by Jim Abbiss (Arcade Fire, Arctic Monkeys, Adele), and featuring co-writing collaborations with the likes of Maggie Rogers & Jamie Hartmann, find the Reading 4-piece emerging from the darkness of 2019’s Future Dust full of lust for life and post-pandemic hope.

Due to be debuted live on the band’s upcoming arena tour with Royal Blood, the band drop the album’s first taste with the all-guns-blazing ‘Bloodrush‘ – listen here.

“The verses are all about communicating with my girlfriend – I’d had enough of the monotony of waiting to see her”, says frontman Matt Thomson. “We finally met up in Mexico, quarantined for two weeks together, then spent two wonderful months together in LA. I came home and went straight to Jamie Hartmann’s place where we captured the rush of what I’d just been through. It’s about whatever it is you never want to live without and the joy of being given it back.”

Locked down in Brighton, in the case of a newly-moved Matt – a mere week after returning from a US tour, The Amazons thought they had their third album already half written. But the prolonged lockdown proved otherwise. After months of seeing his L.A.-based girlfriend only online, Matt started writing songs for her which he assumed only the pair of them would ever hear.

“The gap between us was no longer being bridged by WhatsApps and Facetimes,” he says. “I sent letters but that didn’t do it either. We felt further apart than ever. Writing songs about what we’d do when we were together again became my way of taking control of the situation. It allowed me to share something truly intimate. Writing songs is how I process life. It’s the best skill I have and being able to use it to fix a problem gave me purpose again.”

In late 2020, with the band already cooling on the music they had previously written, Matt sent his bare bones new songs, written alone at home on acoustic guitar, to his band mates to gauge their opinion. Straight away they knew that he had inadvertently discovered a new direction for The Amazons.

“I said to the boys, enough with the darkness. As cheesy as it sounds, I wanted to make music that was a force for good, after everything we’ve all been through. It’s easily our most joyous album – sonically we set out to celebrate the return of real life and the communal experience of being back at shows.”

And with that, it all starts here: the boys hit the road immediately with a UK arena tour supporting friends Royal Blood this month, followed by a summer of festivals and a huge newly-announced UK tour in October which will see the band headline London’s Roundhouse.

The Amazons are a band unleashed and How Will I Know If Heaven Will Find Me is a fresh marker in the sand. A new chapter. The start of something very special.

How Will I Know If Heaven Will Find Me – Track Listing

Previous article
AY YOU
Next article
GIVE US A SQUIGGLE