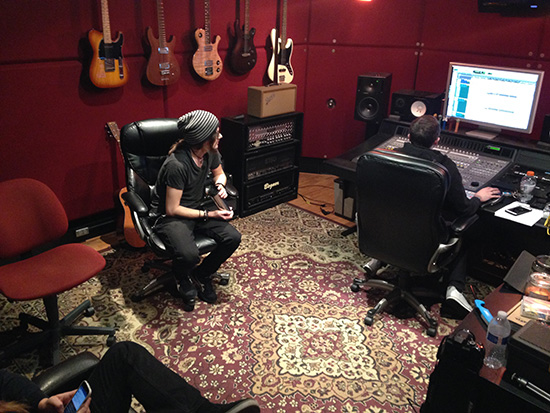 Rivers of Nihil have officially completed work on their follow up to The Conscious Seed of Light. The band tracked at Atrium Audio (atriumaudiopa.com), just a short drive from their hometown to Lancaster, PA with producers Carson Slovak and Grant McFarland. Guitarist Brody Uttley detailed the equipment and process in a pair of blogs, exclusively for heavyblogisheavy.com. Read those both HERE and HERE.

The new album’s details will be released within the coming weeks and is tentatively scheduled for a late summer release worldwide on Metal Blade Records. Stay tuned for music, art, tour dates, and more.

Rivers of Nihil‘s debut album, The Conscious Seed of Light, was recorded in March of 2013 at Mana Recording Studios in Florida with famed metal producer/musician Erik Rutan. While The Conscious Seed of Light is not necessarily a concept album traditionally speaking, Rivers of Nihilbegan their project with the idea that they would release four separate albums tied together with one common theme: each reflecting a particular season of a year. Bassist Adam Biggs elaborates; “The Conscious Seed of Light is intended to be representative of spring and explores various themes concerning new beginnings, growth, and an attachment to the natural world in a post-human Earth. Unlike some concept records however, we wanted to allow each song to work on its own terms. Rather than have the songs rely on each other to move a specific story structure forward; they work within their own separate narratives, but ultimately serve the album’s broader concept.” Rivers of Nihil‘s lineup is rounded out by guitarists Brody Uttley, vocalist Jake Dieffenbach, and drummer Alan Balamut.