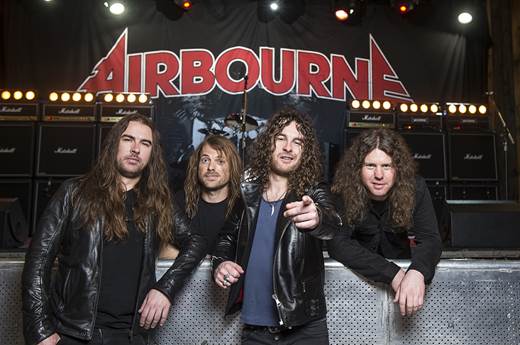 Aussies inspired by an English punch-up

AIRBOURNE have completed work on the video for new single, ‘Rivalry’, the follow-up track to ‘Breakin’ Outta Hell’, with both songs being taken from the band’s forthcoming studio album, ‘Breakin Outta Hell’, set to be released on September 23rd via Spinefarm Records.

The ‘Rivalry’ clip was filmed in the UK & Ireland by the Dark Fable Media company, and contrasts the spectacle of the Airbourne live set-up with an underground tale of one-on-one conflict…

“The lyric probably came from us watching ‘Football Factory’ or ‘The Firm’, one of those kind of films,” explains frontman Joel O’Keeffe, “and I think at the time there was a big grand prix race on, lots of intense rivalries being reported in the media… plus, as with other songs we’ve done, there’s an aspect here of rock ‘n’ roll taking a stand against those corporate forces that seek to restrict our freedoms, that try to shut down the little live venues, leaving bands with nowhere to really hone their craft…”

Musically, ‘Rivalry’ represents something of a different groove for Airbourne, a barrel-chested stomper shot through with typical bite and power, as indeed is the whole of‘Breakin’ Outta Hell’ (the album) – 11 brand new numbers produced by Bob Marlette & engineered / mixed by Mike Fraser.

Following a blistering performance at this year’s Ramblin’ Man Festival, Airbourne have confirmed a UK headline tour for November this year, including two appearances in London due to high demand.