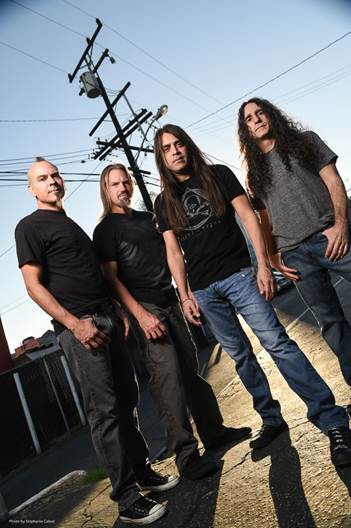 In promotion of their much acclaimed new album “Theories Of Flight”, U.S. Progressive Metal pioneers FATES WARNING are debuting their promotional video for the song “Seven Stars”.

Check out the clip, which was directed by David Brodsky for MyGoodEye / www.mgenyc.com,here:

FATES WARNING vocalist Ray Alder checked in with the following comment about the video:
“We are happy to debut the new video for “Seven Stars” from our latest album “Theories Of Flight”. This song is very special to me. The lyrics for this song were the first that I had written for the new album. I knew that my life was changing, I had met my lovely (now) wife who lived in Madrid, Spain and she was the inspiration for this song. I knew that I would be moving to Madrid soon, so the lyrics tended to come very organically. That theme would develop more as the writing progressed. Stories of change and moving on. Living life really. I found the flag of Madrid quite interesting. Seven white stars surrounded by red…Hence the inspiration for the title. I figured I would give a little tour of the city in the video since I’m now here. Enjoy!”

As previously announced, FATES WARNING will embark on a first European tour for “Theories Of Flight” in January/February 2017. Here are the dates announced so far:

Next to the standard CD and Digital Download, “Theories Of Flight” is also available as limited Mediabook 2CD (with 6 acoustic bonus tracks) and as Gatefold 2LP (with full standard album on CD and the 6 acoustic tracks as bonus on Side D!). All physical are available from the IOM webshop here:
http://smarturl.it/theoriesINOstore