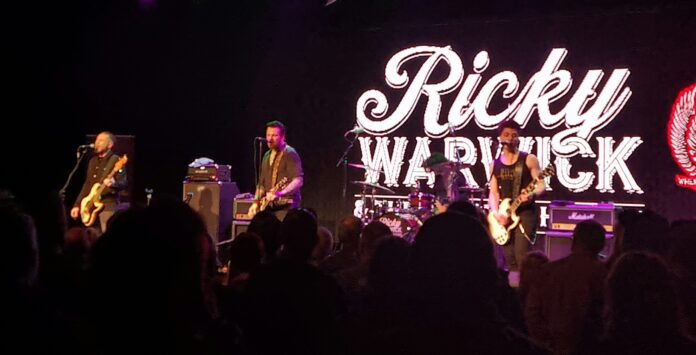 Virginmarys just keep getting better and better. Being a two-piece suits them. And more to the point the urgency with which they play now sees them explode onto the stage almost. There’s plenty of new songs in the set these days – and their new album, whenever it comes – is going to a belter. They start with one “NYC”, but the smattering of old songs they play are almost injected with a fury. “Portrait Of Red” (never the calmest of songs anyway) now sees Ally Dickaty screaming the words: “baby treat my body like a canvas!” like his life depends on it.  It’s the new tracks, though that really impress. “Northwest Coast” is imbued with a working class realism that almost seems to characterise their work. “Free To Do Whatever They Say” is a proud outsiders anthem, and, with the punk solo, this is a proudly outsiders band. They always were, but now Danny Dolan appears to be up for the battle on his drums. “ The Meds” – the brand new single was reviewed on these pages last week – is one of the best songs of their career, at the other end of the sonic scale is the gentler warmth of the superb “Look Out For My Brother”, from the phenomenal “Northern Sun Sessions” record. Afforded a longer support set than many get, they end with a raucous “Bang, Bang, Bang” and if ever there was a band that seems to be intent on making up for lost time after Covid then its this one, right here.

“Look, If you had one shot, Or one opportunity, to seize everything you ever wanted, in one moment, would you capture it, or just let it slip?”

Eminem’s “Lose Yourself” might seem like an odd choice to play Ricky Warwick And The Fighting Hearts onto a stage, but think about the history of this man, how he wasn’t playing music at all before his friends like Toby Jepson and Joe Elliott jolted him back to it.

And the fact he never wants to let it slip has been part of him ever since. The solo albums, Thin Lizzy, Black Star Riders. He deserves it. He loves it to. Which brings us – and him – to this stage in the Black Country to do what he was gifted to do.

To be fair, though, even if you’d given me a million guesses I wouldn’t have ever thought the gig starts with a cover of Mink Deville’s “Gunslinger”, but that is almost how Warwick and these Fighting Hearts see themselves, it seems. Firing their shots and they all seem to hit the target.

The second song, though, is one that sees most of the crowd get very excited. You see, Warwick might be the Rock God of BSR these days, but before all of that, he was the young singer in The Almighty. Its hard now, to put how much this band was loved into perspective, but I suspect that I am not the only one who classes them as his favourite band. Hearing them do “Over The Edge” (one of a few from that band that is played) is a treat.

The Fighting Hearts have some brilliant songs of their own at this point, and “Road To Damascus Street”, “When Patsy Cline Was Crazy (And Guy Mitchell Sings The Blues)” and others like the smash and grab of “Never Corner A Rat” a just a few examples of their brilliance.

There is just one Thin Lizzy song in amongst all this, and “Jailbreak” is one of the finest hard rock songs ever made. That all being said, if ever there was a gig that would see it upstaged then its this one, when they do “Wrench” one of The Almighty’s most underrated tunes.

This band has a way of playing these songs that breathes new life into them. Tax The Heat’s Jack Taylor thunders the drums, Richard Vernon on bass has played with everyone, and Ben Christo from Sisters Of Mercy is a revelation on lead guitar. Nowhere is this better shown than on “Schwaben Redoubt” – a folky thing on the records, is a real rocker here – and hearing “Jonestown Mind”, one of the best couple of songs ever made, is always going to be something to cherish.

“Celebrating Sinking” – written with Andy Cairns – is just a marvellous song, and the title track of the “When Life Was Hard And Fast” album is right up there with whatever else they’ve done, as is the song that started it all for him, “Tattoos And Alibis”, the title track of his debut record. The story he tells before it, though, speaks volumes for the man and the way he views his career.

Warwick doesn’t do encores. But, my goodness how he can structure a set. The last four are one classic after another. The Almighty’s “All Sussed Out”, BSR’s “Finest Hour” (“did I tell you it was Radio 2 single of the week?” he laughs. Probably not the dream when he grew up….) Motorhead’s “Iron Fist” (“that one definitely wasn’t on Radio 2!” and then “Free N Easy” the song that began a 30 odd year love affair with this music for me and maybe many others here.

What is wonderful though, is that however much the music means to us, it always seems to matter just as much to the man who made it.

Ricky Warwick doesn’t have to play these shows. He needs to. And that is a vital difference.