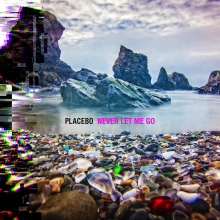 Placebo return with `Never Let Me Go` which is their eighth studio album which was recorded between 2019 and 2021 and the band`s first studio album in over eight years, following 2013’s `Loud Like Love`. It is also their first album to be recorded as a duo, following the departure of drummer Steve Forrest in 2015. I first saw the band in a pub called The Jug Of Ale, in Birmingham, in April 1996 with Scheer and Evil Superstars, it was known as one of those venues on the toilet circuit. Ironically, I also saw Oasis, These Animal Men, Stabbing Westward and Ash there and although threatened with demolition it is now a restaurant called Tipu Sultan. So, I have a deep affection for Placebo going back over a quarter of a century.

The album opens with `Forever Chemicals` which is a really intensive slow burn with a rolling drum beat, fuzzy guitar riffs and an understated bass line with vocals that are shared almost languidly but fit the number perfectly. We have lyrics that at times seem to express the benefits of something that can supress emotions. That compelling slight wavering affliction in the singer`s vocal delivery is prevalent in the sweeping synth driven `Beautiful James`. Frontman Brian Molko has shared that “If the song serves to irritate the squares and the uptight, so gleefully be it. But it remains imperative for me that each listener discovers their own personal story within it – I really don’t want to tell you how to feel.” To me it almost felt like a metaphor for remaining with somebody in your own life despite their almost lack of enthusiasm at times.

`Hugz` is a much faster paced offering with a pounding drumbeat and crashing guitar chords with lyrics that almost seemed like a cry for help or attention in a relationship that maybe isn`t as you`d imagined it could or should be. I have to say I loved `Happy Birthday In The Sky` which I felt had a kind of wonderful edginess to it as it tells a story of loss and the mechanisms we use to cope with it.

I must admit I played it a number of times as it had such an emotive feel and drew me to reflect on certain instances throughout my life.

`The Prodigal` was refreshingly different with what sounded like orchestral strings adding and providing an expansive texture to this number. It seemed like a song of renewal, rejuvenation, revitalisation of oneself or ones soul after coming through a difficult time or even a eulogy. There was almost a sense of defiance towards the end. I read that the rolling, questioning `Surrounded By Spies` is about confronting the erosion of civil liberties. The singer used the cut-up technique invented by William S Burroughs and popularized in modern song by David Bowie. According to the writer “ It’s a true story told through a lens of paranoia, complete disgust for modern society’s values and the deification of surveillance capitalism. The narrator is at the end of their tether, hopeless and afraid, completely at odds with our newfound progress and the god of money.”

I felt that `Try Better Next Time` was kind of “classic Placebo”, much in the vein of timeless numbers such as `Pure Morning` but stunningly anthemic. An earworm of a song and you can almost imagine the call and response from singer to faithful audience with this track when it`s shared in a live setting. We have a much more dreamy piece with `Sad White Reggae` which seems to rise, fall, ebb and flow in pace and volume as it evolves.

`Twin Demons` with it`s pretty bizarre lyrical content races along with a thumping drumbeat and blistering guitar chords, a really superb rock out. The title of the next number `Chemtrail` intrigued me as chemtrails are condensation trails that according to the unproven chemtrail conspiracy theory, are long-lasting trails left in the sky by high-flying aircraft consisting of chemical or biological agents deliberately sprayed for sinister purposes undisclosed to the general public. The sadly departed Prince was a believer and some feel may have died for speaking out about them. This churning quite mesmerising composition seems to relate to the desire for a change of environment rather than anything more sinister.

`This Is What You Wanted` begins as a ballad with tinkling piano keys before a tapped and brushed drum and synth join and add to the singer`s hauntingly impassioned vocals and give it a little more depth. The penultimate track `Went Missing” could almost be autobiographic. It`s a nigh on introspective spoken word submission over a hypnotic backbeat. Sublimely reflective.

The album concludes with `Fix Yourself` another exquisitely contemplative reverie, not quite a self-help guide but maybe some hints toward.

I have read that the band want you to listen, discover and take whatever you feel relates to your own life from `Never Let Me Go` and having listened to this album, it seems to be a valid assertion. This is a real return to form for the band and I feel a certain amount of excitement at the thought of getting to witness, hear and enjoy some of these tracks in a live setting. We have in `Never Let Me Go` an hour of aural pleasure and stimulation in the company of Brian Molko and Stefan Olsdal, time to me that I guarantee you will be so well spent.