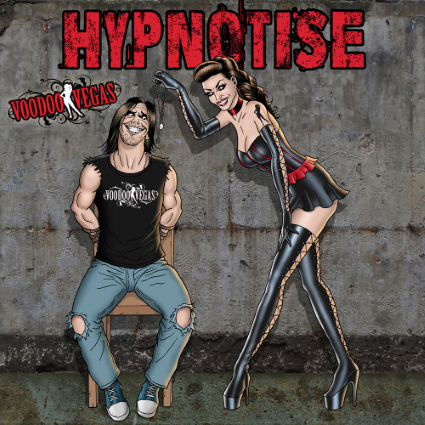 On which Bournemouth’s hard rock kings up it several notches.

Come back with us, if you will, three and a half years to – believe it or not – a Snooker Hall in Staffordshire on a rainy Good Friday where shoulda-been-huge Manc three piece Fury UK were playing a date on what turned out to be their last UK tour.

That night, the support band was Voodoo Vegas, and if you will permit the rampant self-indulgence, – it does have a point – this is what MVM (given that we were another name in those days not MVM, but still) wrote about their show.

“Voodoo Vegas are opening up on this particular trek, and they do a reasonable job. Man mountain frontman Lawrence is happy to be here and happy too with the revamped décor (“you’ve painted it black since I was last in this room,” he says. “It’s a proper rock club now its black.”) He also has a rather idiosyncratic approach to crowd participation. Faced with a group of disinterested punters, he jumps off stage and confronts them until they join in – he’s a very big man so you probably should do what he says, and soon the chaps are clapping along. Vegas are everything you would expect a band called Voodoo Vegas to be. Taking their cue from the bands of the Sunset Strip circa 86-91, they offer a catchy brand of sleazy rock. Their website tells you all you need to know. They are, it says “rock n roll the way it used to be” and according to the profiles the last album that Nick, one of their guitarists, bought was “Slave to The Grind” by Skid Row. Whether that is true or not, who knows, but it says much for their ethos.They posses one excellent song in “King Without a Crown” and a bunch of pretty good ones. Ending their set with two untitled new ones gives a rather lopsided feel though.”

That was then, this is now, and my, my how Voodoo Vegas have grown. Their album “The Rise Of Jimmy Silver” showed a band that was ready, “Hypnotise” shows one is ready for greatness.

Actually everything we said about VV that night back in 2012 is still true (and any band that loves “Slave To The Grind” gets bonus points) it’s just that they’ve upped their game and improved just about everything.

They still play up to all the cliches – look at the sleeve for the EP – but they do so with a glorious polish and a mighty sheen. The title track for this little collection, is almost bursting to get out of the blocks, and when it does, it has a chorus that has eyes on bigger things than a Tamworth Snooker Club.

To be fair, though, even that’s eclipsed by “Tied Up” and if it’s a catchy hook you want then, it’s right here. To follow that there’s a down and dirty swagger about “Round And Round” which gets a harmonica in there too, as if in tribute to all those Cinderella songs that the band no doubt loved.

“Killing Joke” rounds the thing off. Not a homage to Jaz Coleman’s men, but instead a heavy, pretty dark affair with a massive groove.

Frontman Lawrence has been doing interviews in the lead up to this. He’s been quick to tell everyone that this EP is a taster for the new record, with hints rather than absolute copies of whats to come, and that’s the point, this is varied. It’s the work of a band who know what their roots are and where their influences lie, but one who want to explore. In short, if you thought you knew Voodoo Vegas think again.

“Hypnotise” is released on 12 October