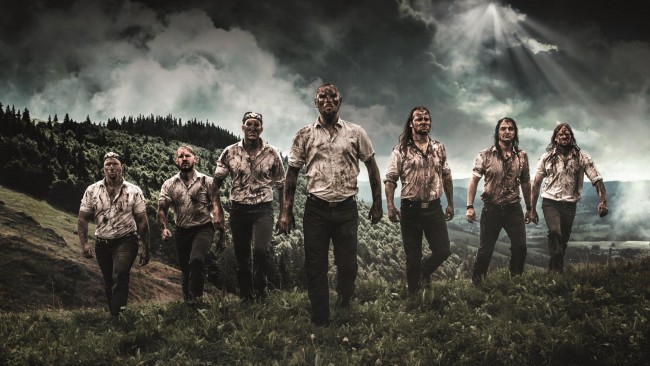 Horns up. They are back

2015 has been a pretty intense year for the folks in FINSTERFORST! The release of their latest album“Mach Dich Frei“, many breathtaking club and festival shows and an almost unbearable hot summer certainly kept them busy and sweating! Today the band has unveiled new details about an upcoming release.
Read what the band has to say:
“We want to inform you that we do not intend to sit on our lazy asses and do nothing creative. After all, we have to work at least a bit for our big salary, don’t we? Therefore, we will enter the Iguana Studios around the end of the year and beginning of 2016 to record a next…..thing! … It ain’t gonna be a usual full-length album, but an EP! I can’t deliver you the complete details now, because we are still in the writing process and think about what weird stuff we want to present to you guys.
One thing is for sure: musically this next release will NOT be on the same tracks as “Mach dich frei” is! Please, that is no reason to whine and fall into deep holes of depressions – you will still recognize our Black Forest Metal sound and style! We simply feel like trying something in addition that fits to our quite weird personalities before creating a next full-length album. Be sure, you will be delighted with a heavy and intense sounding party, which will include together with a couple of new own compositions also some cover songs!”

Are you curious, or skeptical about what FINSTERFORST is going to plan now? Either way, we assure you this is something that you will not want to miss! More info and news coming soon!