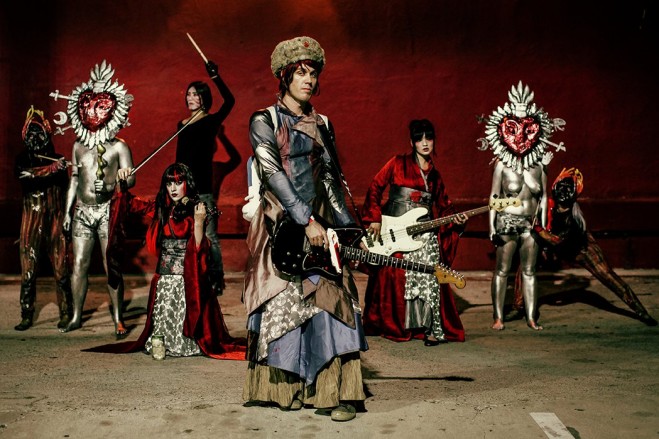 How you can be part of the show, plus vinyl re-release announced

Multinational enigmatic art rockers The Red Paintings are delighted to announce the release of a very special edition of their critically acclaimed debut album ‘The Revolution Is Never Coming’.

Limited to just 500 copies worldwide, the 23rd of October will see the release of a two disc coloured vinyl edition of ‘The Revolution Is Never Coming’. One disc will be white while the second will be red. The vinyl edition will be available to pre-order from The Red Paintings online store at http://www.theredpaintings.com/trinc/music-store. Audiophiles will also be able to acquire the vinyl directly from the band on The Red Paintings upcoming tour – if there are any left!

‘The Revolution Is Never Coming’ was 5 years in the making and features a 35-piece orchestra, 22-piece choir and more across 13 tracks of biting, futuristic alternative rock. The album was recorded and mixed with the late Bryan Carlstrom (Alice in Chains, Rob Zombie) in world-class studios around the globe. Typically ahead of the game, The Red Paintings raised donations from their fans to fulfil their creative vision long before the likes of PledgeMusic and IndieGoGo became household names.

Following a Summer and early Autumn of touring the world, including Australia, New Zealand, the US and across Mainland Europe, The Red Paintings will return to the UK for a ten date headline tour in November. With the show including unique set designs, one of a kind costumes and live participation from local artists and volunteer human canvases, The Red Paintings live experience is like no other band on the planet, and simply must be seen.

The full tour details are as follows:

Support on all dates will come from ‘Them & Us’. Tickets for the tour are on sale now. The Red Paintings November 2015 UK Tour is presented by X-ray Touring. All shows are 14+.

The Red Paintings would like to invite local artists to submit their works to be involved with their tour, and also for volunteer human canvasses to be painted at the shows. Any interested parties can contact the band directly onartsubmissions@theredpaintings.com.

The Red Paintings recently released their mesmeric music video for for their new single ‘It Is As It Was‘, which was given it’s worldwide premiere exclusively through Kerrang! Magazine’s official website.

Previous article
EYES OF THE RAVEN, One For Sorrow, The Darkhorse, Shebrew, Tower Of Crows @The Flapper, Birmingham 12/9/15
Next article
REVIEW: VOODOO VEGAS – Hypnotise EP (2015)