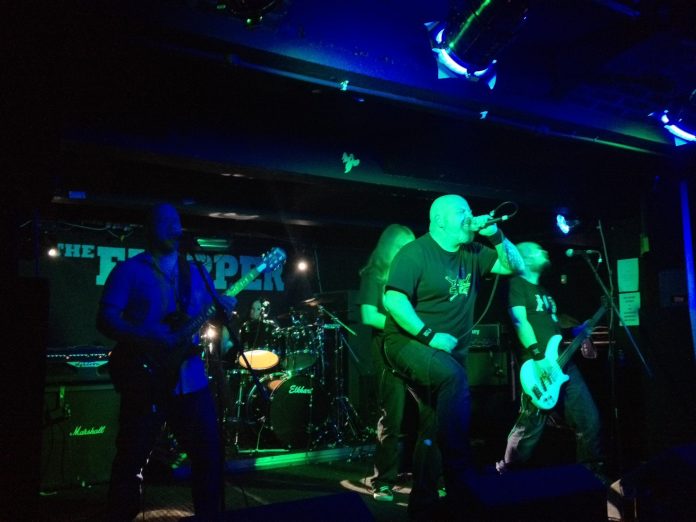 The sweaty confines of The Flapper lend themselves to downtuned, meaty rock. Big riffs just sound great down here and Coventry’s Tower Of Crows deal in those by the barrow load. “Dusty Crowns” and the closing “Lay The Blow” – which is a little faster and adds a real groove – are masterclasses in just that. With the latter being a new one and a possible hint at the future, it seems the hotly tipped combo have the talent to live up to the waves they are starting to make. Tower Of Crows could be ready to fly.

Birmingham’s very own stoner trio, Shebrew, are a different proposition. Slower, more deliberate and yes, there’s a touch of Sabbath here too. The there piece play with such mesmeric intensity – singer/guitarist Frank seems in his own world – that they cannot and will not be ignored. Mostly here the riff is king, with songs like the instrumental “Red Foreman” content to move at their own pace in ways – and to places – the music wants to go. After a period of slight inactivity over the last few months, Shebrew are now back and firing on all cylinders – and that means the Birmingham music scene is a better place.

The Darkhorse are a guitar down due to technical issues, so their power is diminished, yeah? Nope. Not a chance! Singer Barry merely ditches his six-string and attacks the living shit out of songs like “Dying Is The Only Cure” which is like a British take on Pantera mixed with some sludge stylings. Whether everything is going perfectly or not, the Northampton mob only know one way to do things – and that’s loud and crushing. Any lingering debate on pretty much anything is rather rendered pointless by the closing brutality of “March Of The Infected” and it’s mighty close. Indeed only one question remains: how good are The Darkhorse going to be at full-strength?!

For a London band One For Sorrow don’t half play the Midlands a lot. Maybe they like us. We definitely like them. Tonight, a couple of things are (slightly) different. Singer Joe has hair for starters. And because it’s a stoner night their set is a little more groove filled and perhaps not as aggressive than usually. Here’s a thing that is just the same as ever. One For Sorrow are superb. They may play bad shows. We’ve never seen one. Tracks like “4:20” – which starts things here – and the Orange Goblinesque “First To The Fight” (which you’d guess would only depart the fisticuffs when it’s declared the winner) are excellent in this – and probably any other – setting and “Merciless” is aptly named. With debut full length new album out soon there’s much to be excited about in the world of One For Sorrow.

“You bring the beer, we bring the groove.” That’s the motto of Black Country metal mob, Eyes Of The Raven. The five piece probably forgot add “if you ain’t got the beer, we’ve brought some anyway.”

Because what’s so great about EOTR is the fact that they are least pretentious band on the planet. Never part of a scene, instead they are completely inclusive and play music for all of the right reasons.

Vocalist Dave arrives on stage with a bottle of Hooch (it’s “got all the sugary goodness of a bag of crack” apparently) and with that they….urmmm, crack on with “Bury Your Demons,” which like all their other songs is full of a lot more than the no frills, have a laugh metal, they like to claim. Instead they write groove metal shot through with a Classic Brit heart.

“Cast The First Stone” is delivered with a real anger, “Lessons In Blasphemy” which sees bass player Craig quit the band (in jest it should be added) likewise. Actually that sums up the band. For all the laughing and joking, they do this because they love it and when they kick in and play the music, it’s like someone flicks a switch and they become serious all at once.

“Embrace The Void” is perhaps their heaviest number, while “Sometimes Bruised, Never Broken” and the huge chorus of “Redeemer” are perhaps their best, but really, as ever there’s nothing to dislike about Eyes Of The Raven.

The midlands scene is so healthy right now, that there’s plenty of gigs elsewhere tonight. Yet, as the breakneck and appropriate “We Stand As One” finishes the evening off, this is the only one that MV would have wanted to be at. Metal’s underground came underground and proved its strength beyond doubt.