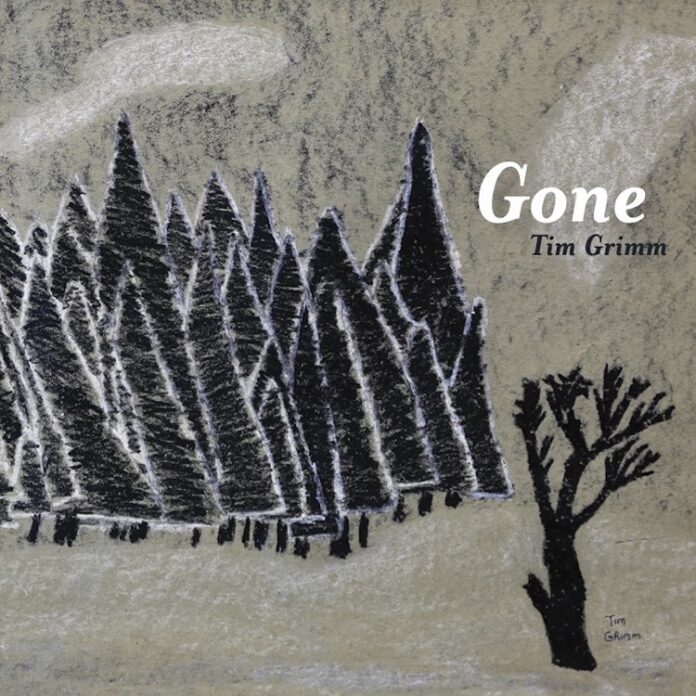 As we move through “Gone” – basically nine songs of reflection of one type or another – there’s a lot of loss. Lots of not knowing how to navigate through things, but somehow always doing so.

Yet one line, over all others, shines through to me. On “Carry Me Away”, the pay-off line comes in the chorus. “Dreams”, Tim Grimm sings, “are just a sad excuse to stay.”

Here, though, there’s a stoic determination. Not least because the harmonies from Tim’s wife, Jan are brilliant, and surely they stand as a metaphor for an unbreakable bond. One that says we can face things together.

There’s something deep all the way through these songs, ingrained in them almost, under their skin. “A Dream”, its opener, might be filled with lush strings and a poetry, but it feels like it is hiding its truth. The skill, of course, is that its truth might be evident to Grimm, but its your truth. The words have a life of their own. That’s what the best do. And do not doubt that Tim Grimm is one of the very, very best.

“Cadillac Hearse” changes the feel. Part Dylan-esque talking blues and part timeless country, its tale is one that HBO might use as the basis for a miniseries. Credit to him for being able to rhyme “fins” with “ambulance” too. That takes some doing.

“25 Trees” is the work of a wordsmith. Simple as that, and literally too. Given that it lists some of his favourites. There’s a gentleness a contentment in the words and the feel, and it underlines something that might be forgotten in all of this: Grimm has an incredible voice. Earlier in the review I wrote that he “sang” – but does he? It’s more that he is reciting these works to you over a melody. He has superb, rich tones. They suit his work perfectly.

Right in the middle of the album are two songs that are more specific. “Laurel Pearl” tells the story (and honestly that’s a good way to see this in its entirety) of a young girl that died, while “Joseph Cross” is perhaps even better. The only one that Grimm doesn’t write. Instead it is written by his friend Eric Taylor (he himself died in 2020) and made even more poignant given that Taylor’s wife Sarah joins to sing vocals over this beautiful thing about the native American man at its heart.

Perhaps the best of all, though, is “Gone”, the track itself, and what has disappeared here might be America itself, “There’s a rider in the White House and Liberty has run/ Everywhere you turn these days, there’s another smoking gun” he opines, and in so doing speaks for so many of us that despair of what we are in the post-truth era. Whether it’s this side of the Atlantic or Grimm’s side. He juxtaposes this with the loss of John Prine and the results are sensational, frankly.

“Dreaming Of King Lear” is doubtless the most poignant for Grimm. Naming three of his friends and fellow songwriters (including Eric Taylor, who was mentioned earlier) and its windswept, almost Celtic tones are beautiful.

It’s clear that Tim Grimm knows he stands on the shoulders of giants, but that doesn’t stop me saying that he is in that company himself. “Gone” is a work of desolate beauty, but it is beauty nonetheless.