BAND OF THE DAY: THE GARRETT BAND 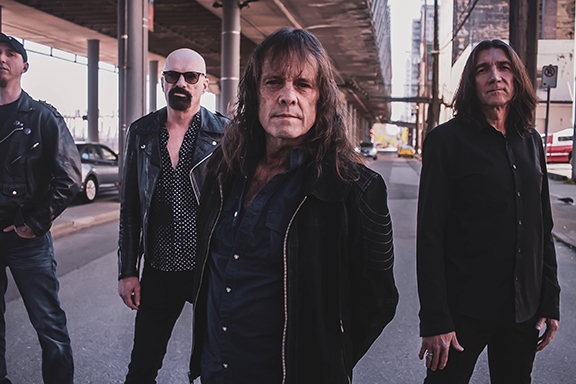 Thriving in the music industry, especially during the past few years, are much the same virtues needed in our day-to-day lives: purpose, knowledge, drive, ingenuity, adaptability… Leave it up to accomplished Canadian progressive rock quartet The Garrett Band to both encapsulate and demonstrate all of these, and more, in their powerful and moving new single, “One More Day” — available now!

The second single release from the band’s fourth studio recording, Sound Evolution, the exceptionally talented Vancouver-based artists don’t shy away from shining the spotlight on some pretty tough subject matter across the five-track EP.

For its part, “‘One More Day’ is about dealing with feelings of depression, self-doubt, isolation, and the realization that healing needs to happen so life can be lived in a meaningful way,” songwriter, vocalist, and multi-instrumentalist Sean Garrett explains.

Leading with plaintive piano and punching through with a wall of guitar, “One More Day” runs through a gamut of hard hitting emotions over it’s four minutes. Using his pro-trained, commanding and expressive vocal to big advantage, Garrett sings from the perspective of a keen observer who yearns to be with the tortured central character of the song.

Those essential virtues listed above came together as this quartet tried to come together to create their latest album. Plans to gather in Québec to record, as well as some tour dates overseas, were scuttled as the world careened into the COVID-19 pandemic — causing the group to pivot and take a more personal approach to the project.

“This EP has been particularly challenging due to the impact of COVID-19,” Garrett reflects. “With the band not having the ability to meet or record together, a lot of phone calls and emails took place to accommodate scheduling to finish the tracks.”

Talking about adaptability, when the band’s bassist, Gary Koenig, wasn’t available to record, Garrett temporarily took over bass duties; Koenig rejoined the band for the making of a video for Sound Evolution’s single, “The Warning,” in October.

All four members of The Garrett Band are seasoned, life-long music makers. Singer-songwriter and multi-instrumentalist Sean Garrett and lead guitarist/multi-instrumentalist Brian Jones have created music together for over 30 years on the west coast. Bassist Gary Koenig has performed with a who’s who of legendary Canadian artists such as Al Harlow of Prism and blues stars Big Dave McLean and Dutch Mason. Drummer Mike “Machine” Mallais has the distinction of being named Maritime World’s Fastest Drummer, along with endorsements from esteemed percussion companies such as Yamaha and Sabian, and appearances on most of the major Canadian television networks.

As we all wait on how the effects of the newest COVID variant will play out, The Garrett Band is staying hopeful and positively focused on the future and many more days doing what they love. “We are looking forward to getting back together as a band and doing live shows and touring.”

The new single, “One More Day,” and the EP, Sound Evolution, are both available now.