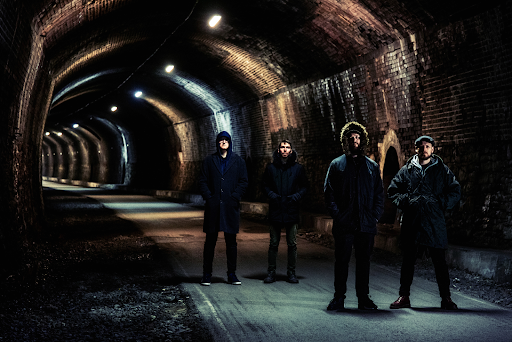 Preceding their first album for over six years, GILMORE TRAIL today return with the graceful “Nocturne”; the final single to be cut from the upcoming ‘Impermanence’ LP (out 21 January, via Chasmata Records).
LISTEN HERE || WATCH VIDEO HERE

A world away from the tempestuous post-rock journeying of previous single “Echoes of Solitude”, “Nocturne” captures an altogether quieter, restrained and contemplative side of Gilmore Trail. A song for the midnight hours, it’s a calming and cathartic instrumental piece to still the mind and soothe the senses.

One of two interludes-of-sorts to be found on their upcoming ‘Impermanence’ album, it finds a natural partner in the track “Convalescence”, with both pieces intended to provide moments of respite amidst the Sturm und Drang of the album’s epic extended offerings. As the band explain:

“Where ‘Convalescence’ represents a much needed moment of healing, ‘Nocturne’ finds its character in the eye of a storm.”
Both tracks will sit alongside the recent singles “Echoes of Solitude” and “Ruins” on what will be Gilmore Trail’s highly anticipated third album: ‘Impermanence‘. An album ultimately about change, transition and uncertainty that finds a band dwelling on notions of legacy, family, history, philosophy and the natural world; its seven earthquaking instrumentals make for powerful and timely suite of songs that ripple with echoes of Pink Floyd to Mogwai, King Crimson to Oceansize.

The long-awaited follow up to 2015’s ‘The Floating World’, the record arrives 10 years into Gilmore Trail’s career, yet stands as the first in their catalogue to feature an array of official guest appearances. Among them are Sally Blyth (a sound practitioner in Sheffield) who provides hypnotic singing bowls signatures on the 10-minute epic “Distant Reflection”; whereas Martin Archer (the owner of Discus Music) features on the Saxophone heard on “Echoes of Solitude”. The record also sees the band welcome into the frame Bob Brown as their new drummer and official member.

With all music written and performed by Gilmore Trail, ‘Impermanence’ was recorded by Danny Mills at Chasmata Studios (Sheffield) in 2019. Mixed by Mills with Joe Richards, it was given its final mastering by Lawrence Mackrory at Obey Mastering (Sweden) the following year. Joe Richards provided initial field recordings of “Echoes of Solitude” and new single “Nocturne”.

Retaining all the touch-stones that have defined their repertoire to date, while embracing the shifting sands of change for all the goodness they can bring, ‘Impermanence‘ is the sound of Gilmore Trail entering an exhilarating new phase in their evolution and taking control of their destiny. “Nocturne” is out now (10 January) and will be the final single to be taken from the album; released later this month.

Following the release of ‘Impermanence’, Gilmore Trail will be debuting the tracks live at the Portals All Dayer in London. Performing as main support for Mountain Caller, tickets are on sale now – details below.
– GILMORE TRAIL LIVE DATES –Sunday 20th February @ The Victoria, Dalston
Tickets: https://link.dice.fm/Y1a93262f9ac