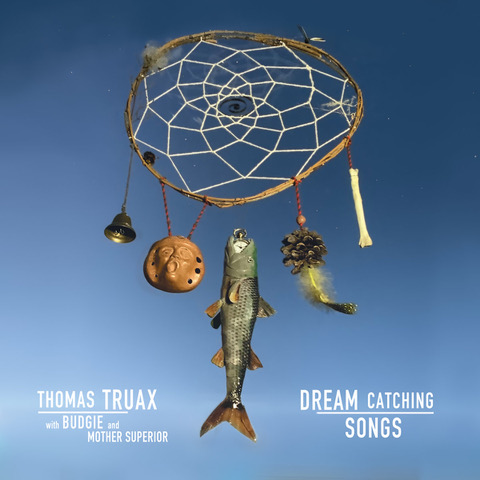 Thomas Truax is an American singer-songwriter and inventor who releases his new album ‘Dream Catching Songs’ this month. He joined forces with his self-made mechanical drum machine Mother Superior and revered drummer Budgie (The Slits, Siouxsie & The Banshees, The Creatures).

The formative tracks for the album were laid down in Berlin, Germany, before Thomas returned to Birmingham, England (where he is now based) to finish the album off over lockdown in his own home studio. ‘Dream Catching Songs’ is the artist`s tenth studio album.

The album opens softly with `Dream Catching Song` a gentle hypnotic track with an echoey drum rhythm. A dreamy number that ambles along quite mesmerisingly and is a delightful introduction to this new release. A drum roll and some synthy bleeps lead us into `Everything’s Going To Be All Right`. A positive mantra delivered initially in a spoken-word style which seems to come alive as it evolves. A fairly pop like piece with a sing a long chorus towards the end before fading out. About this track the singer has said “The scene is a kitchen full of ‘beautiful losers’, crowded around a messy kitchen table, wrestling with current circumstances, and celebrating comfort in friendship. There are references to William Shatner’s ‘real space flight’, Coco Chanel’s old flat, and characters from my fictional world ‘Wowtown’”.

`Birds & Bees` had a kind of retro fifties vibe with a sort of resonating guitar sound and a rolling drumbeat. We have a jagged stop start texture to `The Anomalous Now` with a spoken word oration that is akin to a flight attendant pointing out the safety features on board. As the number expands the singer allows his mechanical and human cohorts their brief moment in the spotlight before strolling back along the melodic path he has chosen to lead us.

`Free Floaters` for some reason brought to mind Edwyn Collins but without the angst. An enjoyably soothing, mediative, and maybe introspective musing. We have snippets of land or sea gulls shrieking as we slide into `A Wonderful Kind of Strange` which more of less sums up this track. A strange and quite spellbinding listen.

`Origami Spy Arrives In Paper Boat` is a quite entrancing atmospheric instrumental that has a nigh on Oriental flavour with some enticing drum tones that allow a platform for what sounds like a melodica to shimmer above. Peggy Lee`s atmospheric `Fever` slid into my conciseness when I first heard `A Little More Time` which could also have been a Creatures number with Thomas adding his whispered and at times breathy vocals rather than Siouxsie. We enjoy a brief woodwind solo midway with what sounds like somebody blowing through a pipe or tube. The lyrics express what the artist would do if he had more free time such as build a machine out of an old wind chime or an exhibition at the Guggenheim. Cracking stuff.

`Big Bright Marble` is a fairly diverse offering which has a sort of ying and yang concept maybe as it develops. It is at times jagged then melodic with grinding guitar riffs sliced through some varied drum tones and odd musical snippets interwoven throughout. A compelling composition. We close out with `The Fishermans Wishing Well Prayer` is a fairly surreal adventure that takes us into a wonderland of sounds and visions brought to mind from them. We have strummed guitar chords, fast paced and much more relaxed steady drumming, orchestrated textures, piano twinklings that sound like harp strings, percussion similar to wind chimes and a dreamlike lyrical reverie. Bizarre but beautiful.

I felt that ‘Dream Catching Songs’ was Imaginative, experimental, and probably reflects the wide-ranging nature of the artist himself. There was a delightful synergy between the singer songwriter musician and Budgie who apparently work quite differently with one detail orientated and the other much more spontaneous.

This long player really blew me away and I found so many moments of pure joy while listening. At times it`s a little sparce but as the old adage or proverb goes “less is more” and that rings so true here.

If i`m honest, I really think it`ll be hard to find an album I’ll enjoy more this year.

I`ll have to wait and see.