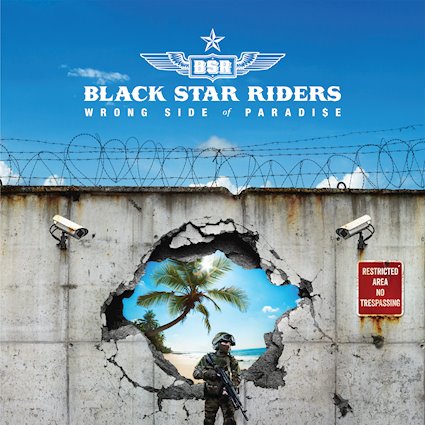 There’s only a couple of bands that I can say I saw their first gig. On the 30th May 2013, though, I saw the inaugural show from Black Star Riders. I crammed into the Marshall Amps Studio with 300 or so others and witnessed history.

Back then they were Thin Lizzy in all but name. Nearly the same line-up as those last Lizzy shows and checking my review of the night on the blog I did in those days, there were seven Lizzy numbers in the set.

That night – and I can still remember it vividly – singer Ricky Warwick had said: “All we want to do is keep the spirit of Thin Lizzy alive and play 200-300 shows a year.”

Its interesting to chart their development since. There’s a lot of water under the bridge, and Warwick is the only one left. The Lizzy stuff is not as prevalent anymore either. And neither should it be. Thin Lizzy are the greatest hard rock band ever (MV will accept no debate on this) but the best modern one is this one. Right here.

There’s not a band who has the back catalogue they’ve got in the last decade, and “Wrong Side Of Paradise” is, in that respect another one to add to the list.

It’s also clear that these 11 songs are less Lizzy and more Ricky, if you will. It’s at this point I am duty bound to point out my lifelong love of his first band, The Almighty and the fact I consider him to be the finest frontman of his generation, but now he “leads” the band, then the title track – which kicks the record off – is straight out of his top draw. I’d go so far as to say that its one of the best songs he’s ever written, which given the words above, makes it pretty good.

In that respect its quite an easy record to review, and a fun one to listen to. Because while other albums want to be “core” this, “genre” that, this is “just” a rock n roll album. Whether it’s the harmonica drenched “Hustle”, or the more mid-paced “Riding Out The Storm” (which deals with depression and concludes “I am just scared enough of dying, that it makes me want to live”), then its as pure a celebration of the music we all love as there will be in 2023.

Sandwiched in between those two is perhaps the best moment here outside of the title track. The elephant in this room is this is the first BSR record without Scott Gorham’s genius. Christian Martucci of Stone Sour was on this instead (although he too has departed since) and he and Warwick do their best Lizzy impression on “Better Than Saturday Night”. It is glorious, and Phil would love it, I am certain.

In truth, anyone who loves rock music should love this. “Pay Dirt” (written with the late Todd Youth) is perfect. And regular Warwick watchers will love the opening line “once upon a timebomb, I was ready to explode”. It’s the sort of thing he’s done for 30 years.

The personal nature of his lyrics is underlined by that one reckoning “my heart belongs to Belfast, my soul belongs to Glasgow” before following it up with “Catch Yourself On”, an Irish phrase, to despair at the modern world’s reliance on social media.

“Burning Rome” is another of the slower ones. It could be this album’s “Finest Hour” and it sticks like glue, “Don’t Let The World (Get In The Way)” is the other “Thin Lizzy” moment, as it were, but the backing vocals are pure Springsteen. “Everything you need is on the other side of fear” sings Warwick and it’s an indication of the hope, the belief in humanity, that pervades this album.

“Green And Troubled Land” is perhaps the most political song the band has ever released. “I ain’t through with two-faced charlatans, savaging this land” spits the words, and its proud Celtic sounds make this one a highlight, but also how the envelope was being pushed this time. There’s a lot of “firsts” here and that extends to the first cover (from memory) they’ve released. They do a fun job with The Osmonds “Crazy Horses” too (although to be honest it’s more or less impossible not to make that one sound euphoric, right?

For an album that sounds in equal parts as if it was made of joy and stoicism, it’s perhaps fitting that ends with the groovy “This Life Will Be The Death Of Me”. Bass man Robbie Crane and new drummer Zak St John lay down the foundations, as the last words go: “divided we stand, united we fall” and if that’s how the world is in 2023, then maybe the unspoken message here is that music will save us? Rock n roll will find a way.

At that gig in Milton Keynes all those years ago, Warwick had also said this: “All we want to do is entertain you guys. Don’t bother looking for an agenda, as you won’t find one.” “Wrong Side Of Paradise” is perhaps the most reflective and acerbic album of Black Star Riders career to date, but those words are still true.

Just as its also true to say that this album makes clear that they are the finest band of their type on planet rock right now.