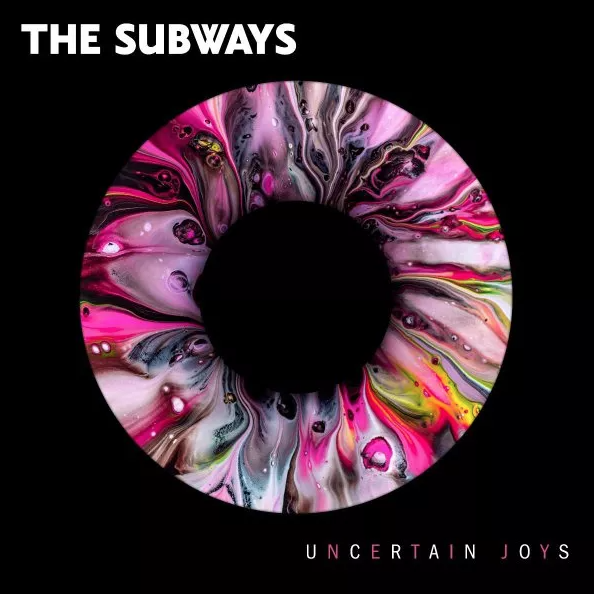 Home Counties finest The Subways have enjoyed an interesting eight year sabbatical. Singer and guitarist Billy Lunn took time out to pursue an English degree at Cambridge University while original drummer Josh Morgan left for personal reasons. Camille Phillips took over the literal “hot seat” on drums and  joins remaining member bass player and vocalist Charlotte Cooper, who has added the synth to her musical repertoire. They have a new album `Uncertain Joys` released this month which addresses themes personal, political, and societal ranging from Lunn’s newfound exploration of his own bisexuality to his struggles with mental health problems and bipolar disorder, and issues surrounding Black Lives Matter, and the patriarchal society we live in.

The album opens with You Kill My Cool` which is about the ecstasy, emotions and passions when sharing love making with a consensual partner. The number itself has some probing bass and pounding drums with some sizzling guitar riffs with Billy`s vocals stretched atop and throughout that do give it a slightly risqué texture. Lunn`s attempt to write a song for Kylie Minogue follows with `Love Waiting On You` which includes the first attempt of introducing synthesisers to one their songs.

It`s wonderfully melodic, upbeat, and fairly dreamy and I can understand why the writer chose to encourage the group to record it rather than passing it on.

Title track `Uncertain Joys` takes its name from the almost forgotten Kent poet Sarah Dixon poem ‘To Strephon’ and is a reflective musing on changing your outlook and mindset on romantic relationships. It has a jagged feel at times with synth hues at the forefront but has a pop rock touch throughout with both Billy and Charlotte trading vocals. Lunn’s bisexuality is conveyed on `Incantation` which is a powerful rock offering where the trio really get to let loose musically. It also has a fairly catchy chorus strapline.

I read that ‘Black Wax’ was a love letter to music itself and is a pretty enthralling earworm of a track that bounces along with some searing guitar riffs. Things slow down with the quite anthemic `Lavender Amelie` which is somewhat stripped back with strummed acoustic guitar, synth colours, Billy`s vocals and some captivating harmonies.

`Fight` was written for those who suffer daily oppressions simply because of who they are and is a spiky, repetitive composition where the lyrics are nigh on rapped. We have according to the band “a critical look at how the internet has shaped not only the way people (particularly young men) take in information and use it to dubious ends, but it’s also a look at how influencer-hood is anti-creative” with `Influencer Killed The Rock Star`. A fast paced number where the annoyance and irritation is almost tangible in the vocal delivery. There’s a spoken word segment and screamed vocals at the midpoint and more words recited at the death.

`Swanky Al` i`m led to believe is a satirical, self-lampooning look at what it is to be a male singer in a band, mocking the patriarchal structure upon which those respective images are contingent. A mid paced composition that has a fair old swagger about it. An evaluation of how male-controlled ideas shaped the singer from an early age follows with `The Devil And Me’ which had a pirate come punky sense-ability with twangy guitar riffs. The chorus sounded a little like some lines of Blondie`s number  `Call Me`.

`Joli Coeur` translates to a variety of words that in essence have a similar meaning such as sweetheart, pretty boy, lover boy, sweet cheeks, pretty heart, beautiful heart, lovely heart and lover-boy. Although I read that it was permeated with reflections of the pandemic and some close to the singer that passed away. It had that strut and bluster of numbers that Oasis were so adept at producing along with a fairly introspective slant. The album closes with `Futures` a kind of musical triptych touching on the singer`s struggles with mental health. The piece itself swings through stages that are anthemic, mediative to finally a blistering shouty rock out before concluding with an audio excerpt of Antonin Artaud, a pioneer of postmodernism, questioning who, or what, he was as he lay dying in his bed.

`Uncertain Joys` was an interesting listen and addressed a number of subjects that the writer needed to share, It`s not a concept album but did seem to be moving there at times and i`m sure the end product was pretty cathartic.

It`s an album that i`m sure you`ll draw your own conclusions from but worth investing in.

Previous article
DEEPLY DIPLO
Next article
STICK IT ALL ON RED