REVIEW: THE BLACK HALOS – HOW THE DARKNESS DOUBLED (2022) 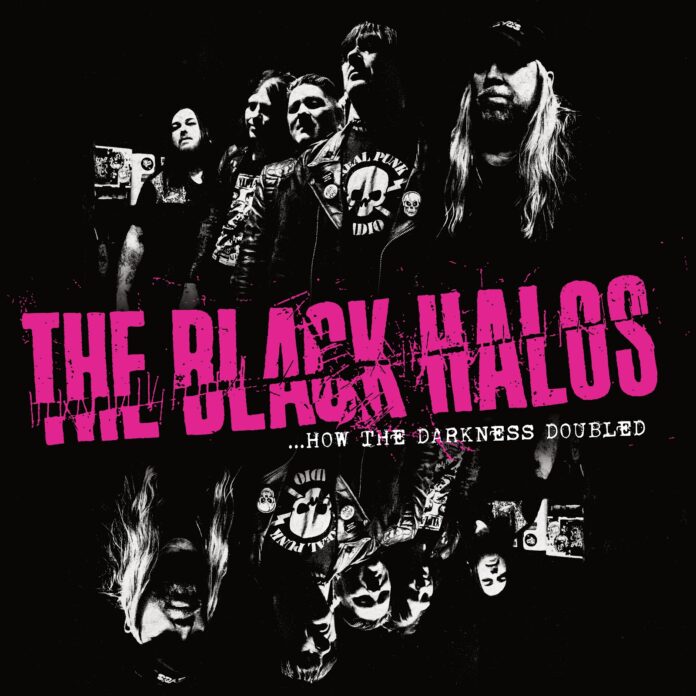 The world in 2001 (for the most part, until it went to shit in the Autumn) was much better than it is now. Social Media didn’t exist, the internet hadn’t ruined everything yet, and if you wanted to find great music, you had to work for it.

For us, that meant a fledgling community built loosely around a love of The Wildhearts and centred around a record shop in the North East of England, but also out of being besotted with The Backyard Babies and getting import records of a similar type from some mail order place in the South East.

Back then, we all knew – and loved – The Black Halos, they were sort of the biker equivalent to British dandies The Last Great Dreamers. They’d formed in 1994, in Vancouver, and after two albums, they vanished seven years later. Too good to carry on? Rock n roll, always leaving them wanting more, better to burn out than fade away, and all that? Maybe.

None of that matters now, though. Because after a 21 year hiatus, three of them are back. Billy Hopeless, Rich James and Jay Millette have reunited for “How The Darkness Doubled”. Apparently Rich and Billy had always intended to call the third record that, so they did.

Oh, and they’ve rather casually knocked out one of the finest punk tinged glam records of the year, we’d best mention that.

“History Of Violence” proves that rather unequivocally, and its got all the trademarks of the sound. The lead guitar (Jones has been busy over the years, guitarist with Michael Monroe, Ginger Wildheart, AMEN amongst others), and the sneering vocals. It’s pure as the driven slush. Straight from the streets and sounding like a gang, still.

Hopeless still sounds like he’s gargling gravel, but it suits the wonderful “Tenement Kids” perfectly, and the idea of being kept in your place by power – “increase your debt to save your health” – is all over “Uncommonwealth”.

Look, all of this is brilliant, all of The Black Halos stuff always was, but there’s one that stands above all the rest. “Forget Me Knot” celebrates rock n roll, it celebrates life itself. That it does with what amounts to a sleazy reworking of “Teenage Kicks” is a thing not lost.

I reviewed the recent re-issue of Demolition 23, and I was struck by its energy and its brilliance. The vibe of “Better Days” is the same, looking back on the past with rose-tinted spectacles, but in common with all of them, you try and resist its hook. They’re all addictive, and that includes “You Can’t Take Back The Night”. Power pop – if it was being sung by Motorhead – it’s glorious. Indeed, it’s like a beacon of hope, a suggestion that however bad it gets, we’ve got rock n roll. “Even Hell Is Looking Down” is the embodiment. Ok, we’re in the gutter, but lets dream of the stars.

“All My Friends Are Like Drugs” comes in with a melody, a lip-curl and some intent. Some of mine are like sleeping tablets, but I suspect this might not be the narcotics they’re discussing. There’s a jewel everywhere you look, and in case you were thinking, ‘man, this sounds like Hanoi Rocks’ along comes “Ready To Snap”, when the man himself, Mr. Michael Monroe announces himself to prove that he’s the godfather of this shizzle.

This line up of the band sounds perfect. John Kerns on bass and Danni Action (who also produces with Jones) on drums are the perfect foils. You’d say they’ve re-invigorated things, but that would imply that TBH ever sounded anything less than invigorated. What I will say for certain is that “Frankie Go Home” could have been on one of The Professionals records (their producer Dave Draper mixes this).

“Ain’t No Good Time To Say Goodbye” is loaded with regret. A sort of ballad (certainly compared to the rest) “if you’re hearing these words,” sings Hopeless, “one of us ain’t alive”, but it all ends on “A Positive Note” – literally – and the backing vocals get it right: “too late. Won’t change”. The Black Halos know this.

The sleeve notes call them a “legendary band” and its one of those where to some of us, they are. All of which means this first album for 21 years could have been a car-crash (hell, some of the TV shows that return after lengthy hiatus are enough to put you off for life) not “How The Darkness Doubled” though. This is an utter triumph.