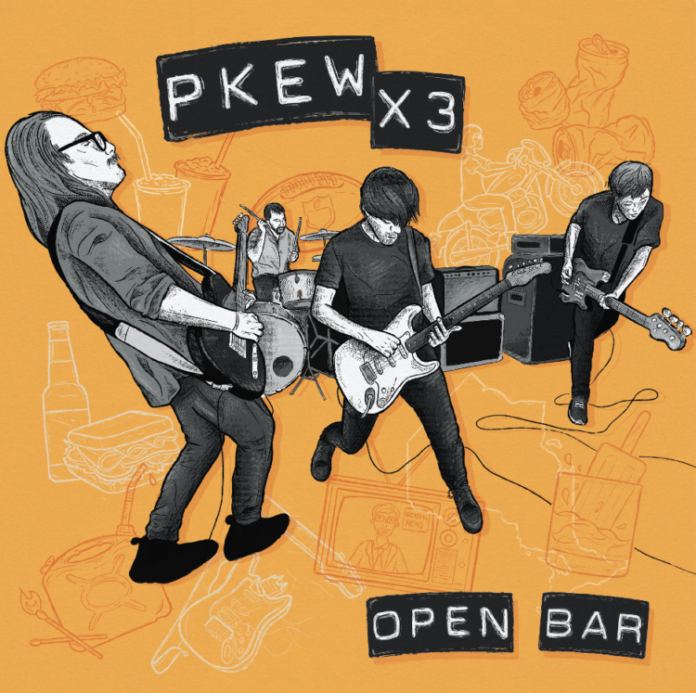 I love doing MV. Love it.  But there’s one thing I dislike about it. When bands you really like release records, but you don’t know because you never got it sent to review.

So it is that “Open Bar” has been open since May – and is probably boarded up again given the worldwide crisis that capitalism created – but here we are.

It’s worth pointing out how I found out about the damn thing. I’d popped onto Spotify to listen to a song called “The Polynesian” by the band (I’d loved it, just like I loved them, since seeing them open for The Hold Steady in 2019), and noticed there was a fourth album.

So now we’re all caught up with the dull stuff, lets answer the only question that matters: is “Open Bar” any good? Silly question. About as redundant as “would you like a night with Kylie Minogue?” Just say yes and get on with it (the same statement applies to the other question too).

If you like Pkewx3 before, you still will, if you aren’t familiar, then allow us to help. Somewhere in the venn diagram between Gaslight Anthem, The Strokes, Weezer and The Hold Steady, there they sit.

Opener “Let The Bridges We Burn Light The Way” builds nicely. Starting like its stripped down and introspective, then, boom: “Let the rich kids all know we were here/Let em clean up the streets that we paved with empty beers”. This is for the dreamers who hate their day jobs, but ultimately know they aren’t going to do anything about it. Except, that is, if you’re Pkewx3, you can write stupidly catchy songs. Songs like “Moms Dime”. Cheerily taking the piss out of spoilt little rich kids in bands (“how do these bros keep getting shows? We’ve spent our whole damn career in Ontario”). But this is the signpost that things have changed a little this time around. They are more willing to experiment, as the solo shows.

“Maybe Someday” is musically more like their other stuff and the lyrics are still clever: “as you get older its harder to correct, being an idiot” sings Mike Warne, and lets be honest, we all get it. “Mr Meowers” on the other hands is that Strokes thing underlined.

Right in the middle, comes the one that sums them up. “Fresh Pope” is the slacker anthem you’ve waited for. Join them as they skip work to celebrate the New Pope, because “the motherfucking pope is back” before the pay off line: “I skipped work, cos I just didn’t wanna go”. Driven get goers these are not.

My god they can write a melody, though. “Beer Stick N Ched” (all 97 seconds of it) the glorious ebullience of “Safety Last” or the bass driven, Buzzcocks-ish groove of “A Different Jimmy”, are all bound together by the golden thread of melody. The latter even does that thing they do every so often and layers horns over the top.

David Laino’s drums are the MVP of “Stick To Your Guns, Pookie”, driving it through with a real energy, the sax on this makes you think the obvious, but the Big Man never joined a punk band, not really.

Beyond saying hello to the band in Birmingham when they opened for Spanish Love Songs just before the pandemic, I’ve never met the four, but I am going to assume “Drinking In The Park” is autobiographical. Work all week, get pissed at the weekend, make some excellent music about it, seems to be the way here.

“Open Bar” is full of all of that, “Young Pro” carries it on, but its not happy hour. “I’ve wasted my money and wasted my life”, goes the first line, but in honesty, it sounds like they’re fine with that.

Pkew Pkew Pkew stay true here to what made them ace in the first place, but they recognise that album number four needed to broaden the horizons slightly. They’ve done that to great effect.