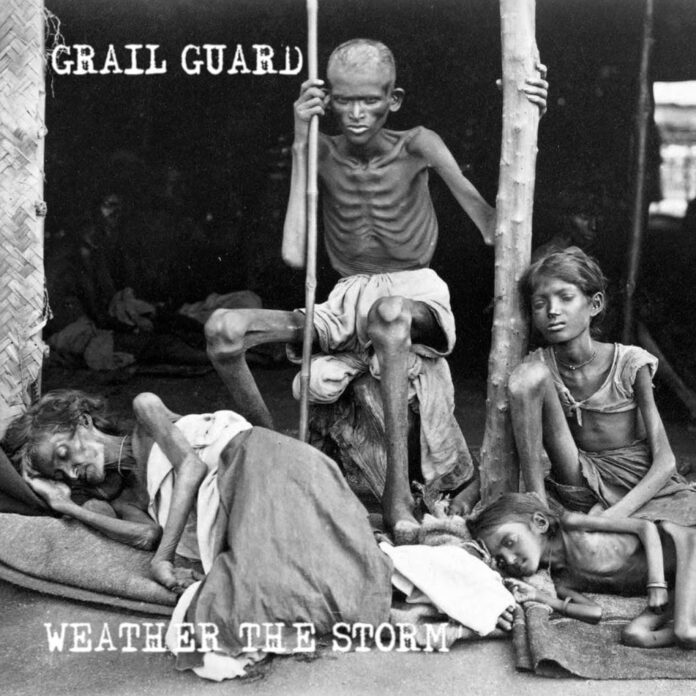 Last week, that scumbag Jeremy Clarkson goes for a swanky lunch with Camilla – the one who Charles was shagging when the now dead Queen had Diana killed – two days later he writes a sexist, misogynistic column about how much he hates Meghan, who is Camilla’s daughter in law. The S*n publishes this shit. 20,000 people complain. Scumbag gets on twitter and says “oh dear I put my foot in it”. Most of the world goes “oh its Jezza, he’s alright on The Farm thing, bless him”. Meanwhile, the Press Regulator looks into the complaint. You know where the bloke who oversees this was earlier this week? At a private dinner in Rupert Murdoch’s flat.

Basically, the world is rigged. The power ain’t at the ballot box. The power is with rich filth who hate us. They’ve designed this system to keep us down. Make sure we know our place.

Which is the mood I was in when Grail Guard’s second EP arrived. Straight outtta…..urmmmm Warwickshire, “Weather The Storm” is seven and a half minutes of laser guided nihilism. Somewhere between Discharge, Napalm Death,  Sleaford Mods and The Chats, comes this. It seethes, it rages, and so it should. 2022 is a shitshow the rich and powerful planned. This is the fightback.

Let’s start with track two, shall we? Just because “ATAB” contains, at it’s heart the spat out hook of “we are ruled by a party of c**t’s”. And there’s no surer way to get yourself on here than hate Tories (not that the rest are much better).

It’s vicious, and its small town frustrations burn through, but there’s also a cleverness to this. You can’t just attack, you have to give something to hang on to. Each of these does it beautifully. The title track, for example, will get its line about “we are the slaves, they are the masters” into your head and it won’t leave. “We all die with nothing” it screams. Does it have to be like this? Well the aforementioned “ATAB” might think so.

“Still Fucked Up” at just a shade under three minutes is close to prog rock (maybe not) but it is the reason that Sleaford Mods came to mind. You watch the two of them do what they do and Jason Williamson appears ready to explode, and this is the same. Exactly the same. Indeed, when filth like Nigel Farage is tweeting “Britain is broken” with not a hint of irony, its hard not to agree with the line “like a pig in a trough living in his shit, ruining lives and being praised for it”.

“Weather The Storm” is like a tornado, a whirlwind, a blitzkrieg, It knows, deep down, that resistance is futile. That ultimately, the needle returns to the start of the song and we’ll all go along like before (probably the only punk review to quote Del Amitri!) but that doesn’t mean you don’t go down swinging.

Punk rock comes in many forms, but my goodness it doesn’t get a lot more furious and visceral than this.