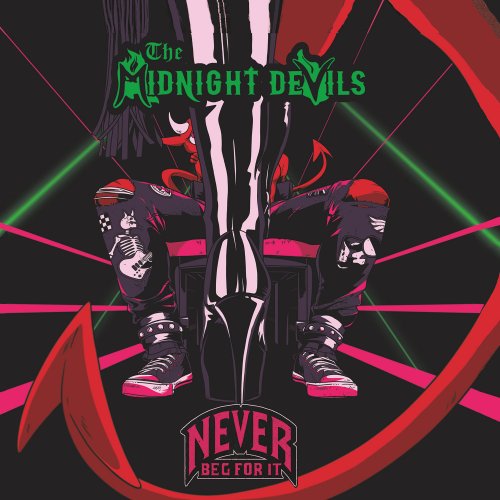 There’s a lot of bullshit talked in documentaries and publications about the effect of grunge. If you listen to the so-called experts, the moment Kurt Cobain put that second record out, loaded up on guns and brought his friends, every other form of music stopped.

Proving that to be wrong is one of two musical causes MV believes in.

The other is even more simple: I want to end the term “hair metal”. It’s ludicrous and no one called it that back then. I know this, I know both of these things. I grew up in the 1980s, and I lived through Grunge. I can remember the Autumn of 1991 just fine. I remember buying “Use Your Illusion I and II” in September of that year, but not “Nevermind” which came out the week after on the same label.

I did buy it, of course I did, but not until I’d left school in the summer of 1992, and not before I’d been laughed at by the whole of year 11 for buying Def Leppard’s “Adrenalize” when the Nirvana hysteria (pun intentional) was at its height.

Fast forward 30 years. And frankly, in my late 40s, I couldn’t give two shits for what I am “supposed” to like. I just enjoy what I enjoy.

Which brings us to a cold Sunday night in the West Midlands. MV was there to watch Enuff Z’Nuff.
The support was Midnight Devils. A band from Omaha, there were three of them, the singer, about eight foot tall and six stone in weird face paint, one – the drummer – was wearing a skirt and the guitarist, in Sniper, looked like he’d belonged in another band altogether.

They came out on stage, seemingly with a desire to grab the whole of the crowd by the throat and make them feel something. It didn’t matter what. I went from – in all honesty – saying to my mate “what the fuck is this!” to texting people about how good they were in the space of half an hour.

The reason was simple. I hadn’t forgotten my past (music, and loving music, should be a journey and tastes should evolve) but its true to say I hadn’t seen a band like this for years and years. Indeed, listening to “Never Beg For It”, even now, six weeks after seeing them, I am not sure there’s been anything quite like this for years.

The opening to “Sound Of Domination” is like stepping back in time. Filthy, sleazy, and totally unashamed. This is the music of the Cathouse in 86, where shit went down. The sound is different to what you’d have heard from The Rainbow. Dirtier. Nastier. No foreplay.

The same goes, in truth for most of it in terms of attitude anyway. “Stay In Your Lane” has a bit of a radio groove, “Highway 69” is the perfect glammed up tune, and if I haven’t said “The Dead Boys” yet, then I probably should.

There’s a problem, of course. And we’ll address it. There’s a track called “Squeeze Me Dry” on this thing. It’s pure, unadulterated filth. It’s incongruous in 2022 that a track should rhyme “go all night” with “oh so tight”, but here we are. That’s the point, I suppose. But then, we used to buy records simply because they had the “Parental Advisory” sticker on (thanks Tipper!) and my late mother bought me Danger Danger’s “Screw It” record. We haven’t got that po-faced have we?

You don’t need to be a musicologist to spot the Stones thing going on in “White Line Fever”, at least before it explodes, and in some by-gone age, “Glitter Connection” is a radio hit and Riki Ratchman is going on about it on Headbangers Ball.

It’s striking actually, listening to the record, how varied the tunes are. Maybe because they didn’t actually play that much that night with EzN (Chip Z’Nuff produces this) and you were focussed on the force of nature that was singer/bassist Sam Spade (hope you got your weed back, Sam!), but the colours of this never came through that night. “Long Gone” for example is a bluesy thing with a Van Halen solo (and Sniper doesn’t half dig VH it seems). “The Trick” continues the vibe.

The last two, kind of, sum them up. “Party In The Back” imagines that “she lost more than that in my backseat” isn’t just a Bon Jovi line, and instead a request. A boogie and they’ll sleep when they’re dead, while the immense fun of “Living for The Weekend” is the sound of a band that gets bored at 9.01am on Monday morning and daydreams. Oh and it has more than a flavour of Warrior Soul.

So, “Never Beg For It” is gonna take it whether you like it or not, and is best summed up like this. For all the fact they sound like Faster Pussycat (and they really do) Midnight Devils wouldn’t get your number off the Bathroom Wall, but they might shag you against it.

As filthy, as nasty, and as downright excellent as sleaze has been for years. Don’t like it? They don’t care.

Previous article
ARTIST OF THE DAY: THAT SUMMER
Next article
REVIEW: GRAIL GUARD – WEATHER THE STORM (2022)