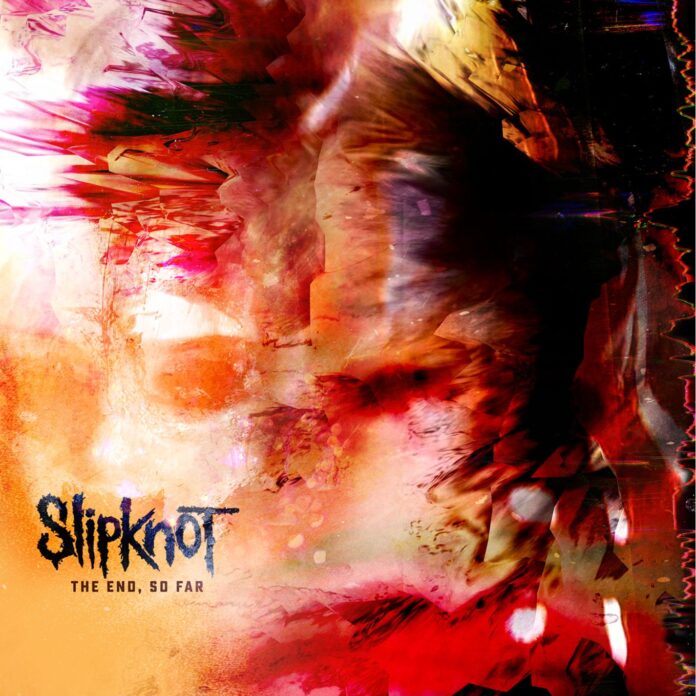 I was driving home last night. On the ring road around the UK’s second city (about 2 miles from where Heavy Metal was literally invented), there was posters up saying “Slipknot – The End, So Far” Out September 30th. That, I suppose, is how you judge entry to the mainstream.

It’s rare that this website gets to review the number one album in the actual charts. You know, the things that everyone claims they don’t care about until a band they like is actually in the top spot. We are here. Slipknot are massive.

The debate about how is redundant. It’s long since over. They can fill arenas. They can fill stadiums. And yet as “The End, So Far” rather neatly proves, they have done it on their own terms. There’s no band that sounds like Slipknot.

The opening song here (that’s a deliberately chosen word – many are not songs, they are exercises in brutality) “Adderall” sees Corey Taylor, #8 himself, croon a bit over a slice of unsettling psychedelics, like the comedown after Woodstock. “oooh you know I am wrong” goes it’s hook. It’s about the only time on this album anyone sounds uncertain about anything.

Indeed, with the benefit of hindsight, that one feels like an entry drug. Because when this gets going “The Dying Song (Time To Sing)” the band turn up and they cause chaos.

Take “The Chapletown Rag”, there’s no way on earth anything should be like this. There’s nine of them in Slipknot these days, and they all seem to playing a different song. And then there’s Corey Taylor. He’s screaming “When everything is God online, nothing is” so, they’re still the kings of sloganeering and in the midst of all this. It works. It all works.

Slipknot have always been ace at seething with rage. “Yen” does it brilliantly. It lurks like a serial killer and when it emerges it’s a quick kill. You don’t see it coming. And they don’t do short. Or conventional. Each of these is an experiment, it seems. Created in a lab by some kind of twisted, evil Bond villain. “Hive Mind” sounds like they should, but it takes its time to get there.

“Warranty” is probably the most immediate and it makes a chorus out of “My advice, now don’t think twice. You always buy brand new”. I’d add, “buy cheap, buy twice” and never buy chairs from Argos without trying them. Christ, that was a waste of money.

Side two – for some reason I think of this in vinyl terms – begins like its prog (and I suppose in some twisted fashion it is?) with “Medicine For The Dead”, and it is mellifluous, but there’s just something a little unsettling around every turn. The Craig Jones led sound effects of “Acidic” give way to a riff that’s as icy cold as anything Ishan has ever done, although Taylor sings this one a little more.

Slipknot I suppose never get enough credit for the way they blend. Jay Weinberg’s drums, Sid Wilson’s turntables, Jim Root and Mick Thomson on guitar. They are all superb throughout, and particularly so on the more rock “Heirloom”.

“H377” is made for the live set. It explodes into action. A white hot pit of rage, nihilism, hate. The reaper is a liar, apparently. I am not arguing with #8 in this mood. Neither should you. “De Sade” is more of a slow burner, but when it catches flame, it does so in a more restrained fashion, (although the thrash metal drums don’t reflect that).

“Finale” almost brings us back full circle to the start. A ballad. Yes, it is. “I know it’s a shame, but I gotta stay, I like it here…..” like they are threatening us it isn’t the end. So far, or otherwise.

When it was released last week, there were one or two complaints that this was a bit all over the place. Whilst its true to say this might not be the most immediate record of their career –  there’s no obvious “Before I Forget” or “Psychosocial” type singalong, for sure, behind the barbed wire, there’s something beautiful. Not easy listening, but there’s a lot of things about Slipknot that aren’t conventional. The fact is they are 21st century metal’s biggest act for a reason – and purely and simply, they are brilliant.