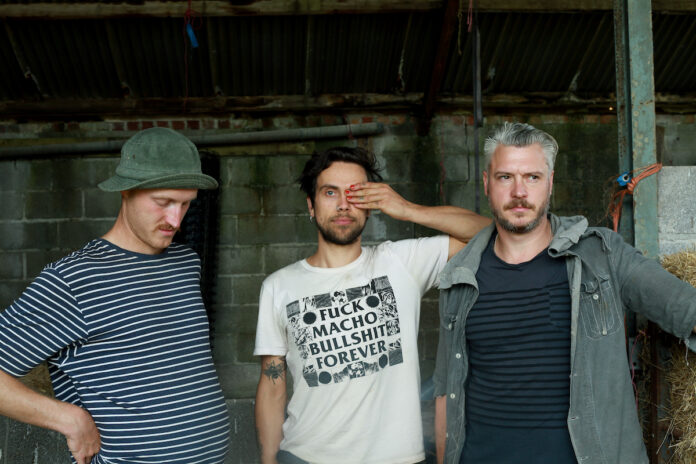 As a taster of things to come, their visceral anti-capitalist debut single ‘DBT’ is out now along with an unnerving, wild-eyed video that reflects their twitching, erratic take on post-garage punk.

Commenting on the track, guitarist Dominic Knight (ex-The Eighties Matchbox B-Line Disaster) says: “Our entire system is based around debt. From using sea shells as markers of goods that are owed, to the paper money we hold in our hands being merely trust in an idea of wealth, rather than having actual value. These ideas always affect the poorest in society and we see it so often with money lending, overdrafts, and borrowing.”

“Promoting ideas of climbing the social ladder through materialism and wealth means people can no longer wait for the next car or phone, they have to borrow in order to obtain it today. This capitalist trick has us blame each other for our ills, and distracts us from the billions that are accrued by the very few, leaving behind them a trail of poor bodies, environmental destruction, and social instability. Debt is slavery. Capitalism is organised crime.”

‘Holy popes’—the irony of giving godly importance to man made ideas. Systems of oppression created to make us subservient—to religion; to capitalism; to the patriarchy.

“It’s a farce, and music is a machine that kills fascism and bigotry,” enthuses Knight. “Let’s dance whilst we overthrow harmful systems.”

Formed by Knight and drummer Luke Bujniewicz in 2020, the band’s acerbic, over-driven first offering is as good a window as any into the gritty, distorted world of HOLY POPES.

After years of being in bands, the pair had both had enough. Music wasn’t hitting the right spot and it felt like a slog trying to make something of it. Initially they came together as a two piece simply to make a noise, not for any sense of being a live band. Very quickly, after the addition of bass player Jake Beckett, they knew they had something special.

“We did our first gig the week of lockdown, and for two years after that we barely saw a live show, let alone play one,” laments Knight of the band’s beginnings. “During that time, though, we began working on our album, producing and recording it ourselves during the months that lockdown eased. We wanted to make something raw and in your face, so in the spring of 2022, we spent two days laying down the album live in our studio.”

“We didn’t care,” explains Knight. “We were making exactly what we wanted to with no intention of thinking about labels, tours, fans…it made us excited again.”

Further new music and live dates will be revealed over the coming months.